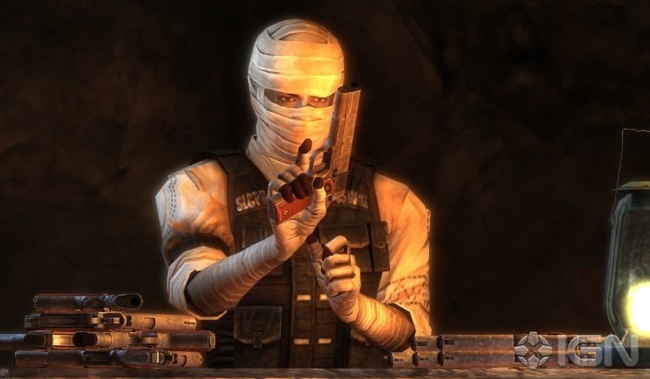 Review: Travel to the murderous wastelands of Zion in Utah in this PC game that is dark, desolate and a little dreary.

Honest Hearts follows you as you travel to the Zion National Park in Utah with the Happy Trails Trading Group. Things don’t turn out quite so happy for your companions. They’re all killed within the first few minutes of entering the new environment, leaving you alone in a beautiful landscape of canyon and river and (for once!) drinkable water. The painted murals on the bedrock are beautiful and the sporadic rain adds a bit of mystique to the world.

Fans of the Fallout series have long since made peace with the franchise’s unfortunate tendency to crash in-game. Don’t get me wrong, Fallout ranks as one of my favourite game series ever, and I have happily spent more than 80 hours in the Mojave Desert of the latest instalment in the franchise, but it does detract from the overall game experience in a most telling way. Unfortunately for fans that have been waiting for the second DLC for Fallout New Vegas after December’s Dead Money, the Honest Hearts DLC has the same inherent instability as the main game. In the five-hour session I played the game crashed twice, and it’s this glitchiness that could drive away gamers that are new to the franchise and perhaps not quite as invested in its post-apocalyptic world.

Mysterious Stranger
The highlight of Honest Hearts is the introduction of one of New Vegas’ most interesting characters. While playing the main game, you may have come across the story of the Burned Man. Once Caesar’s most trusted man, he was the founder and leader of Caesar’s Legion, the ultra-violent rampaging antagonists of the Mojave wasteland. Failing him in battle, Caesar sentenced the Burned Man to a gruesome death, covering him in pitch, lighting him on fire and tossing him off the side of the Grand Canyon. Rumour quickly spread that the Burned Man survived, but you never heard any more of it during your travels through the Mojave. Now you get to meet this Burned Man face-to-bandaged-face, and decide whether you pick sides with him or his less militant counterpart Daniel.

Give me a worthy opponent
The story the game follows is not bad, but also not incredibly interesting or engaging. A huge downside to the new environment is the weak enemies – there are no new animals, and the ones that roam Zion are a little bit pathetic. The aggressive Yao Guai pose a minor challenge when they attack en masse, but for the most part you tear through the wildlife like a bullet-spewing tornado.

The choices you make during the game are vintage Fallout; there’s no real right or wrong, so choosing between a peaceful resolution and a full-on genocidal war is a much harder decision than you’d think. This moral ambiguity is one of my favourite parts of the Fallout experience and it is well intact in this expansion.

My gripe with the Honest Hearts DLC is that it is just so ordinary. There’s nothing that really stood out for me – nothing to really complain about, but after playing through the entire DLC I couldn’t find one moment where I jumped up and rushed off to tell someone about it, something that made Fallout 3 and New Vegas so addictive.

As with the previous DLC, Honest Hearts raises your level cap by five, so you’ll have a stronger character – one that may even be able to defeat some of the terrifying Deathclaws that I just can’t seam to beat. But I can’t say the game experience warrants the price – get this if you literally live in the New Vegas world, but if you’re a casual gamer wait for the more promising-looking Old World Blues, due for release in June.