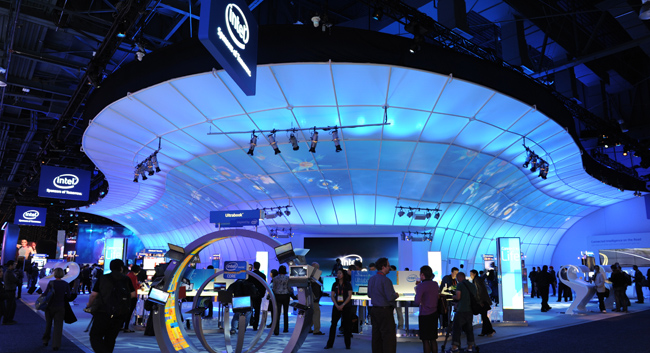 Intel is probably best known for its pc and laptop processors, but the tech giant announced that it is making a play in the smartphone market here at the renowned Consumer Electronics Show (CES) in Las Vegas.

Intel announced that its chips will first be available in the Lenovo K800 smartphone. As with most things in life, however, there is a catch. The phones will only be available in China. Well, at first anyway.

At the launch event, Liu Jun, senior vice president of Lenovo joined Intel’s CEO Paul Otellini on stage to reveal exactly what we can expect from the K800. The Atom powered phone will rock Ice Cream Sandwich, a 4.5 inch 1080p HD screen and NFC capability.

While Lenovo will be the first smartphone to carry Intel’s chips it won’t be alone. During the announcement at CES, Intel announced a partnership with Motorola Mobility, acquired by Google in late 2011.

As part of what Intel calls a multi-year, multi-device strategic relationship between itself and the mobile device provider the company will provide chips for Motoroal Mobility smartphones. The phones are set to launch later this year, although there was scant detail on the specifics of these devices. It was revealed, however, that the relationship would also extend to tablets.

“When great silicon and software technology meets great mobile and design innovation, amazing things can happen,” said Intel President and CEO Paul Otellini. “Our long-term relationship with Motorola Mobility will help accelerate Intel architecture into new mobile market segments. We expect the combination of our companies to break new ground and bring the very best of computing capabilities to smartphones and tablets, which in turn will help to create powerful new experiences that connect and enrich people’s lives wherever they may be.”

“We are delighted to be partnering with Intel to deliver smartphones and tablets based on Intel’s Atom processor to consumers and businesses,” said Sanjay Jha, Chairman and CEO, Motorola Mobility. “Though there are 5 billion mobile subscribers in the world, less than 800 million are using a smartphone today. With Android as the leading smartphone OS globally and advancements in computing technology we see tremendous opportunity for the converged devices market.”

Intel’s processors power a number of the ultrabooks on display at CES this year, although its foray into the smartphone market is undoubtedly one of the biggest stories of the show to date. If nothing else it means that the Android devices powered by them will have the firepower of one of the industry’s biggest players behind them.