In this day and age, US$265 can get you a seriously tasty gadget. A brand new Kindle Fire? Done. A cut-price laptop? Grab one for under US$300. How about a 7-inch, 1Ghz tablet rocking Linux? Yours, in the form of the Spark Tablet. Budget tablets are being vomited out of the stables at a rate of knots, so what makes the Spark tablet so damn special?

Peeking under the hood

World, listen up. The Spark is the first tablet to be marketed as an open device, with open software and an unlocked bootloader. This means that anyone can jump in, develop an app and publish it on the Spark’s app store.

The Spark smartly changed its name from the Zenithink C71 to the Spark. It also managed to pack a hefty amount of budget hardware into its plastic shell. The CPU is a 1Ghz AMLogic ARM Cortex-A9 chip, similar to the processors found in high-end smartphones.

The graphics core, however, is a joke. A Mali 400 GPU runs the device and delivers its fare share of lag, as demonstrated in the video below the article. But for under US$300, who’s complaining? While Mali is capable of 1080p image scaling, it’s doubtful that the GPU could handle such power on the Spark. But hey! The open source driver for Mali is ready to be hacked, so perhaps an eager developer can wring some goodness out of it.

The display, always the most hotly contested feature of a tablet, is a respectable 800×480, far from the sexy goodness of the PlayBook’s 600×1024 screen, another 7-inch wonder tablet. Storage and memory is kept to the bare minimum, with 4GB of internal storage and 512MB of RAM powering the Spark.

As for the OS, Mer Linux, an open source “continuation” of MeeGo runs the show. MeeGo, last seen in the Nokia N9 is a deliciously intuitive operating system, and one that readily scales to meet the needs of the developer. The Spark has been refitted to run KDE Plasma Active and Mer instead of the usual Google Android OS.

The Spark won’t set the world on fire, but it may find its way into the homes and hearts of those looking for a low-priced tablet. On the other hand, some tablets just want to sit back and watch the world burn. Expect the Spark sometime in May. 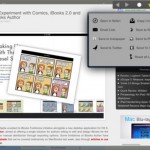