One of the most important smartphone launches in the recent times is about to happen this week, that of Samsung Galaxy S4. Galaxy S smartphone, which Samsung released way back in June 2010, spawned a family of amazing smartphones that were well-received. In Oct 2011, PC magazine reported that together Galaxy S and S II sold over 30 million units. After Galaxy S III was released in May 2012, it broke all records, as reported by CNET. The lawsuit between Apple and Samsung has been regarded to be one of the factors that actually positively affected Samsung’s growth.

In this article, I’ll discuss with you what happened in the past few months regarding the next big iPhone competitor, Samsung Galaxy S IV.

Those technical specifications are as follows: 5 inch screen, OLED display (as opposed to AMOLED found in other phones in the Galaxy range), Android OS, Exynos processor (Samsung’s own mobile processor), LTE, NFC and more.

In another story in Asiae.co.kr (November, 2012), we got to see some believable specs of the device. They mentioned a 4.99 inch HD Super AMOLED display, which has been featured in the Galaxy family and other Samsung smartphones. Also, that report mentioned the device should be announced in the Consumer Electronics Show in Las Vegas that concluded in January. We now know that did not happen.

In January, Samsung-focused blog, Sammobile pointed out that it had some definitive proof of wireless charging on Galaxy S IV. Also, they mentioned a 2600mAh battery as opposed to 2100mAh on S3. Sammobile has confirmed a few details as given below:

This is one of the news reports that actually confirmed some of the technical specifications of the device. Exynos 5 Octa processor (1.8 GHz, quad-core ARM Cortex-A15), Super AMOLED HD (1080p) 4.99 inch display, 13 MP camera, 2 GB RAM, etc. This particular image of the device has also been making rounds in technology circles. Bendable screen technology is something Samsung has been working on for a while. At CES, Eric Rudder, chief technical strategy officer for Samsung gave us a demo of the flexible display that Samsung developed. I came across this story in Reuters that talks about bendable screens on the next flagship phone by Samsung.

Another rumor that surrounds this smartphone is an internal industry talk about something called ‘Project J’. TechRadar later speculated that the Project J probably is S4 Mini rather than S4 (see the code name Altius mentioned above).

It was the New York Times that reported about the S4’s eye-tracking feature. The story that appeared on 4 March cited a person that has experience using the phone. The specific software that is used to track your eyeballs and find out where to scroll has to be accurate enough to give a great user experience. If you have listened to a recent Engadget podcast, there were doubts expressed whether Samsung’s device would be able to do that precisely. Samsung does not have an amazing track record in software development like Apple, Google, or Microsoft. Hence, it is doubtful if their eye-tracking software could really provide some accurate scrolling.

If the user doesn’t enjoy this feature, then there probably will be a means to turn it off in the phone.

Based on the rumors we were able to find, we have reason to believe these are the technical specifications of Samsung Galaxy S IV.

We have not been able to identify if the screen protection is done with Gorilla Glass 3 from Corning. The large 4.99 inch screen with 1080p Full HD resolution does make the display an attractive feature. In order to know more about AMOLED and other smartphone displays, visit this article.

Another important story that came out is that Visa has partnered with Samsung to make use of the NFC capability for its payWave mobile payment system. This was announced in the MWC, Barcelona. Visa payWave works like this:

We are not sure how this works on Galaxy S IV. We’ll find out soon enough.

Galaxy S IV is one of the most anticipated smartphones of 2013, although it will release to strong competition. A few smartphones worth mentioning include Sony’s Xperia Z, HTC’s One, LG’s Optimus G Pro, and a few rumored devices, such as iPhone 6/5S and the Motorola X-phone. Exynos 5 processor is one of the fastest in the industry and we have seen its power in Google Nexus 10 tablet. However, the competition is strong with Qualcomm coming up with Snapdragon 600 and 800 processors, and NVidia’s Tegra 4.

We know everybody is eagerly waiting for S4 to hit the market. We just need to wait until 14 March, when Galaxy S IV will be unveiled in an event in New York’s Times Square. This is an image that Samsung posted on its Facebook page: If you look closely, you will see the live footage of the event does stream on Samsung’s YouTube channel. That’s all you need to know. We will see you at the other end of the event. 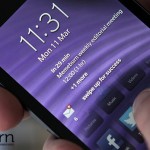