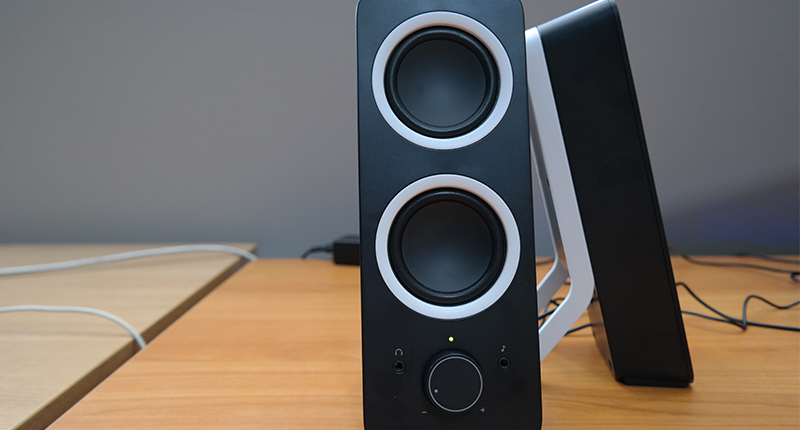 I’ve been a happy Logitech customer for a while now. Seven years in fact. Its ever popular X-530s are still in my company, tickling my inner ears with its gorgeous sound delivery. But, the speakers are a hassle to keep organised. Some customers desire quality sound without the complications of a 5.1 setup. Essentially, a compact yet stylish pair of table toppers.

This is where the company’s new entry-level Z200 comes into play. The tall, twin-driver desk-standing set is available in white or black with inverse accents.

With this, you get solid build quality, a 1.8m corded power brick – which is no larger than a typical cell phone charger – and two satellites, eternally joined by a slightly shorter cord. The control unit features the power connection at its rear, a 3.5mm jack port and line-in port with the volume knob on the front (which doubles as the power switch). All controls are easily accessible at the control unit’s foot, with the ports sitting alongside.

Thankfully, everything is easy to organise with a few cable ties and a few minutes to spare.

On the side of the unit you’ll find its most speculative feature. Logitech claims that the user can tweak “the tone control wheel at the side of the multimedia speakers for added deep bass.” Fundamentally, it’s a gimmicky hardware equaliser. Undoubtedly, it looks spiffy sitting on a desk, regardless of the surrounding décor. It definitely won’t harm the room’s venerable feng shui either. Aesthetics aside, it must surely perform as pleasantly as it looks, right?

Well, if you were expecting the Z200 to punch a hole through your neighbour’s wall after destroying yours, you’ll be disappointed. Sure, it’s loud, like Monday morning traffic, but the speakers won’t do your Hans Zimmer or Seal collection any Gotham City-like justice.

The set does, however, provide exquisite treble performance, highlighting the pitchy, emotive tones of Zimmer’s “Rise,” for example. In fact, it’s much clearer than my stellar X-530s. Alternatively, the speakers also shy away from the gruffer orchestral drones of the same piece, or cloud the audio field with muffled mid-range. This is not the end of the world, but it is slightly disappointing.

As for the “tone control wheel,” yes, it does deepen the sound emanating from the unit, but dial it too far at high volume and massive distortion prevails. I didn’t expect the 10-watt output to adequately drive anything deeper than a baritone’s rasp, but Logitech’s “deep bass” claim is gravely misleading. In a world governed by the laws of physics, not hopes and dreams, what you really need for genuine bass is an actual speaker designed to rattle at low frequencies.

But we’ll ignore the bass issue, because it’s not what make these a good buy.

The 2.0 speakers do provide adequate “room-filling sound,” as Logitech claims, thanks to its twin-driver setup. The speakers’ natural habitat would be a small office or bedroom, and in that regard, you’d have no problem in keeping your music private, yet audible.

You’ll also have no problem accommodating the speakers on your desk, nor have issues with lanky cables or over-sized power bricks. Frankly, there is little to fault on this set, except, that damn tone dial.

With its inclusion, Logitech sets up expectations of utter aural grandeur, which really is not the case. The average buyer, however, will overlook the lack of grumble, and really, they should. These are a great pair of speakers, stylish, sufficient in sound quality and easy to set up.

Nutshell: If you need attractive speakers louder and richer than your laptop, tablet or smartphone, you can’t go wrong with the US$30 Z200, just don’t expect them to shudder any windows. 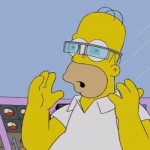