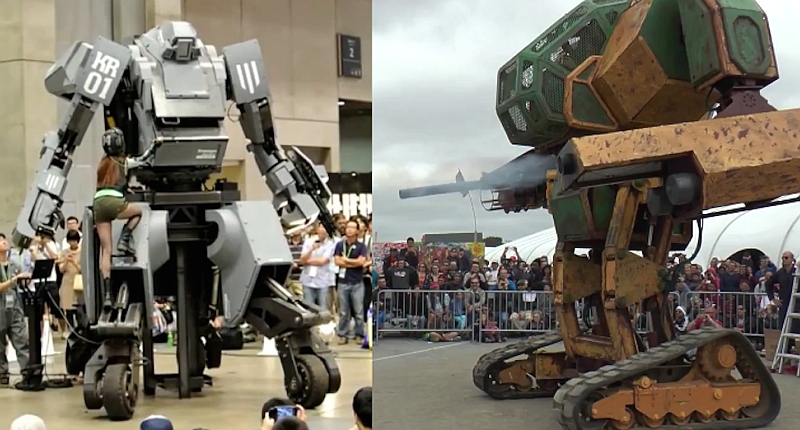 Last Tuesday, a team of American engineers representing Boston-based MegaBots challenged Japan’s Suidobashi Heavy Industries to a real life battle of giant robots. Although a specific time and place has yet to be established, the Pacific Rim-style mechanical contenders are already showing off their mods and wares in anticipation of this epic clash in arena combat.

In this corner, weighing in at a modest 6 tons, with guns capable of firing three-pound paint cannonballs over 160 km/h, is the Megabot Mark 2, “America’s first, fully functional piloted” giant robot.

The Mark 2 requires two pilots and stands roughly five metres tall. While earlier versions pursued humanoid mobility, the Mark 2 moves on tracks with a missile turret gun for one arm and a cannon for the other.

And in this corner, weighing in at a lighter 4.5 tons, but sporting a pair of Gatling guns guided by an advanced targeting system and a heads-up display, is Japan’s Kuratas giant robot.

Currently, the Kuratas is a four-legged robot that costs about US$1-million to make. Additional stand-out features include a three panel cockpit display (with the center offering touch-panel operation) and direct control of the arms. You can even control the robot using a smartphone via a 3G network. As you can see in the video, the Kuratas’ four legs are wheeled, and can assume and ride in either a low or high stance. The Kuratas giant robot can travel up to 10km/h, is gasoline fueled and runs on a diesel engine.

Although both represent engineering marvels and huge leaps forward in the evolution of mechanized robotics, and as cool as watching two giant robots battling it out will be, I shudder to think about the extent of damage and destruction these hulking beasts will someday render on actual battlefields and civilian populations.

For now, let’s just hope these giant robots remain in the arena. 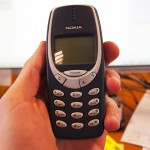