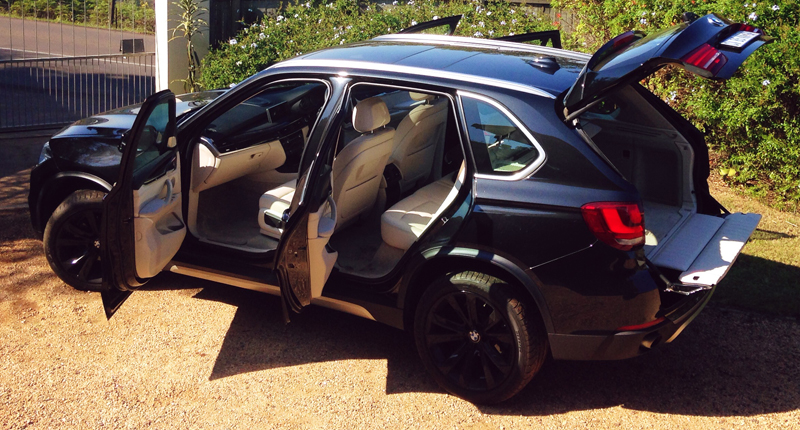 There is an inherent danger when driving a swanky, premium badged car, no not the risk of injury or death from piloting a powerful machine from the scores of irresponsible and irrational drivers occupying the same piece of tarmac as you.

No, the danger here comes from within, in the form of a full blown superiority complex and an increased sense of self entitlement — or more plainly, feeling more important than you actually are. None more so when the car youâ€™re driving isnâ€™t yours and happens to be a brand new BMW.

This is exacerbated, as in my case, when the vehicle in question has 190kW on tap, an earth axis tilting 560Nm of torque, a menacing black paintjob combined with equally gangster-esque gun metal grey 20 inch wheels and occupies a healthy space in your rear view mirror.

A friend remarked that all that was missing was a flashing blue light fixed to the roof, and heâ€™d be right…yup, you guessed it, Iâ€™ve been driving the new BMW X5.

Iâ€™ll be honest, most new cars are good. New BMWs on the other hand are very good and the new X5 is a case in point. Youâ€™d have to sift through it with a fine tooth comb to find fault, and perhaps in a mass comparison test where the author could pit the X5 against its direct rivals (Audi Q7, Mercedes ML, Porsche Cayenne, Range Rover Sport), could you honestly be able to find a blemish on what is quite an exquisite piece of machinery.

Sure, you might be able to argue that the new X5 doesnâ€™t quite stand out in the crowd the way it did all those years ago when it was first unleashed on the world. Perhaps it is too evolutionary in design, however in the motoring landscape where manufacturers are defined by the corporate cookie-cutter-one-face-to-rule-them-all design, the X5 fits into the BMW mould like a sort of four wheeled matryoshka doll.

But letâ€™s be honest, this is not a BMW only affliction. And, if youâ€™re after a blue and white propeller badged SUV revolution, then Iâ€™d point you in the direction of the X6. Subjectivities aside, thereâ€™s no mistaking the X5 as a BMW and a fine looking one at that. Black with black wheels and a cream interior might not be to everyoneâ€™s tastes, mine included. Showing up every scratch and blemish is a black paint trait and sadly evident on the test unit I drove.

However, black paintwork has the ability to mask the subtle convex and concave design details as seen on most new cars, which is a shame really because the X5 has many interesting surfaces.

One major gripe was the cream leather interior trim option, whilst it might look luxurious, inviting and lifting what is usually a sombre black/grey interior â€“ the cream interior just soils far too easily.

Add children to the mix and you have the recipe for an OCD nightmare. Perhaps a mix of black or grey for the carpets mixed with the cream upholstery would work better, if only for cabin longevity.

Tech man…We want to know about the tech!

For starters the X5 I drove is powered by a silky smooth 3.0 litre straight-six turbo diesel engine producing 190kW and a planet tilting 560Nm of torque, going by the name xDrive30d. The white coats in Munich have really hit the sweat spot with this engine, amazingly making it sound more like the straight-six petrol engines of old. (Is that interior sound tuning per chance?) There are two petrol variants as well, for the dinkum petrolhead. The xDrive50i sports a 300kW/650Nm twin-turbo V8 and its little brother â€“ a little less frenetic (and slightly more fuel efficient) 3.0 litre straight-six turbo 225kW and 400Nm.

All engine options are mated to BMWs 8-speed â€˜Sport Automatic Transmission Steptronicâ€™ which I can honestly say flicks through the ratios quicker than a veteran poker dealer deals cards. There are the requisite steering wheel mounted paddle shifters for those that want to play F1, but in the week of varied driving, I only used them once. The auto left to its own devices is just so good, you could really do without them.

And on the inside? Board the X5 and youâ€™re greeted (in my case) by acres of cream leather and an air of sophistication and quality synonymous with anything wearing the blue and white propeller. However, the propensity for manufacturers to design infotainment screens which look like tacked-on afterthoughts has afflicted even Germanyâ€™s finest.

Why the move from the more discreet in-dash design of previous generation BMWs Iâ€™m not sure…Perhaps as has happened in the smartphone space, there is a case of â€œMy screen is bigger than yoursâ€ at play here. 6.5 inches…across, if you have to know.

Anyway, iDrive, BMW’s central intelligence system is now the complete product I suspect it was always meant to be, being (almost) easy to use and fairly intuitive to operate. I say fairly because for a younger generation brought up on a staple diet of smart everythings and applications, it doesnâ€™t take long to get the hang of.

For a previous generation though where every control had its own unique button, iDrive might be a scary, impossible and unfathomably complicated.

All manner of techno-wizardry is available as standard on the new X5 and with an optional extras list as long as my…arm, I would bore you to tears to explain them all in minute detail. So, instead Iâ€™ll mention a few that I found particularly useful/cool.

On the outside Iâ€™d definitely tick: &#10003 Heated and ventilated seats. Because you know, four seasons in one day.
&#10003 Keyless access/central locking/start stop. Because digging a key out of your skinny jean pant is too much of a faff these days.
&#10003 Integrated rear door window blinds. For sleeping babies.
&#10003 Night Vision. One because it sounds so cool, and two because it really does work â€“ identifying pedestrians and cyclists way before the human eye can.
&#10003 Head-up Display. Because, â€œBeam me up Scotty!â€ (and itâ€™s really useful, displaying relevant vehicle info, like gear selection and navigation details)
&#10003 Lane Change Warning. Which I know sounds like a gimmick, but when it saves you that one time you didnâ€™t check your blindspot, youâ€™ll be thankful.
&#10003 Bang & Olufsen high-end Surround Sound System. Because only the best for your karaoke jam sessions.
&#10003 Adaptive Cruise Control. For those holidays to the coast. Well in short, very good. I will say that unlike some other big BMWs Iâ€™ve driven the X5 doesnâ€™t manage to shrink itself around you, that is, youâ€™re always aware of its bulk. Combine that with standard parking bays (Hey, is that parking regulation size or what!), which you never quite manage to fit into, and the X5 shows its size and girth.

Finding a comfortable driving position is so easy, with a massive amount of adjustment between the fully electric seats and steering. You literally donâ€™t need to move a muscle with thousands (maybe not that many) of servos doing the work for you.

Plant your right foot and youâ€™re able to tailgate with the best of them. Truck loads of torque and that brilliant eight-speed autobox working together, there is seldom the need to leave the fast lane on the freeway and when you do take a shoâ€™t left the X5 belies its size and weight and tackles a curvaceous set of tarmac with relish, cornering flatter than Keira Knightleyâ€™s bosom.

Donâ€™t expect M Division levels of steering feel, and seat-of-your-pants performance here. Yes, this behemoth will hit the tonne in 6.9 seconds, which is ludicrous for a vehicle of its size, however it will do it quietly and with little drama until youâ€™re quite literally, very dangerously, land yourself on the wrong side of the law. It even manages to flatten the bumpiest of roads.

Stray completely of the asphalt and the X5s all-wheel drive system will do an admirable job, if you can bring yourself to potentially ruin those rims and tyres. But câ€™mon, letâ€™s be honest, off-road is not new BMW X5s natural habitat, nor has it ever been.

The is new X5 is a very good car, it does everything so well and with that badge certainly pulls at the desirability heart strings, whether youâ€™re a upwardly mobile singleton with a corporate point to prove, or a well heeled family man, itâ€™ll tick all the right boxes.

Just stay away from cream leather.