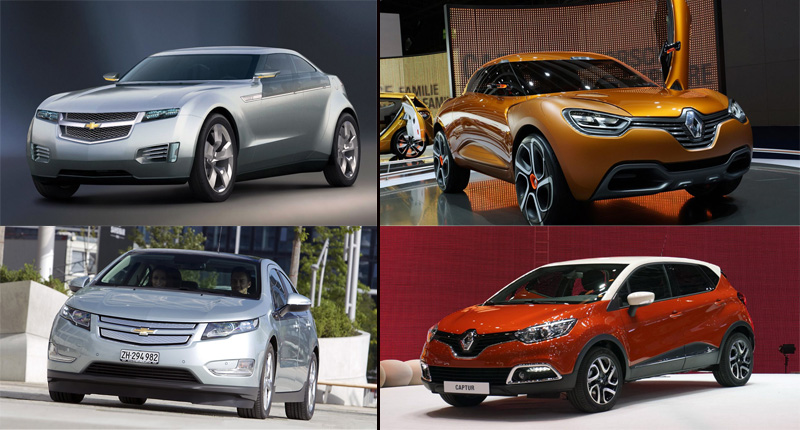 You know how it works. A car manufacturer dramatically whips the covers off a stunning new concept vehicle, leaving the automotive world with its collective jaw pinned to the floor.

And sometimes, once said automaker has established that itâ€™s created enough buzz around the potential new model, it proudly announces that, yes, a production version will indeed see the light of day. We all cheer heartily, since, well, thatâ€™s exactly what we wanted all along.

But what we eventually get is all too often nothing like the original concept. We end up feeling more than a little cheated because all of that promise, all of that wonderful madness has been mercilessly siphoned away, resulting in a mass-produced vehicle that is frankly yawn-inducing in comparison.

Of course, the behind-the-scenes translation from concept and production isnâ€™t nearly that simple. Most concepts are actually never intended to make it onto the road at all, serving instead to explore new technologies, experiment with design or simply draw huge chunks of positive media attention. Plenty of them donâ€™t even feature working drivetrains, in fact.

And, if weâ€™re honest, there are a number of obstacles standing resolutely in the way of a concept car making it through to production virtually unscathed. Significant changes are often necessitated thanks to safety regulations, overall cost, and even simple design feasibility. And, of course, crazy-looking vehicles tend to polarise their audiences â€“ and what sort of money-making automaker wants to slash its target market in half?

Still, there are a few vehicles out there that look suspiciously unlike the concept vehicles that previewed their very existence. Such as theseâ€¦ Here at Motorburn, weâ€™re big fans of the refreshingly honest and surprisingly capable Dacia (or Renault, depending on your market) Duster. Itâ€™s a low-cost compact SUV that places practicality and outright ruggedness far above dashing good looks (yes, this is a nice way of saying itâ€™s not exactly pretty). The 2009 Dacia Duster concept vehicle, however, was an utterly mad little thing with outrageous styling, an all-glass roof and rear-hinged back doors â€“ a far cry from the still-lovable production model. The prototype that set the stage for the Chevrolet Volt boasted a tasty coupe-like silhouette that set tongues wagging and had the potential to make electric vehicles truly desirable. Thing is, despite those super-sexy lines, it was an aerodynamic nightmare. Chevroletâ€™s fix? Morph it into a wholly anonymous four-door sedan that blends into the three-box crowd. Still, at least the real-life Volt stayed true to its predecessor in terms of its drivetrain. The Renault Captur is a relatively funky looking mini-crossover based on the equally likeable fourth-gen Clio. But the concept that previewed it was absolutely out of this world, making even the off-the-wall Nissan Juke appear utterly conventional. The Captur concept was fashioned from carbon-fibre, and boasted a removable roof, 22-inch alloys and gullwing doors. And curves. Serious curves. The production Captur, meanwhile, looks virtually nothing like it. Boo. Throughout its first ten generations, the Corolla never really bothered with making itself pretty. Truth be told, it didnâ€™t need to â€“ it sold well for various other reasons. But when the Japanese automaker unveiled the angry Corolla Furia show car â€“ with its stunning headlights, huge grille and pleasingly planted stance â€“ in 2013, there was hope that the eleventh version of the worldâ€™s most popular nameplate would be different. Those hopes were all but dashed by the production model, which although sharper than its predecessors, pales in comparison when seen alongside the concept. The Suzuki Kizashi really isnâ€™t an unattractive saloon. But view it next to the original 2007 concept â€“ there were admittedly two more show cars unveiled before the production Kizashi debuted â€“ and it looks decidedly plain. The Concept Kizashi 1 boasted fang-shaped headlights, rolled on 21-inch alloys and was lower than a snakeâ€™s ankles. If it were a production vehicle, weâ€™d have three words for the folks at Suzuki: Take. Our. Money. In late 2007, Korean automaker Kia revealed the very green, very aggressive KND-4 Concept, a pie-in-the-sky SUV meant to preview the third-generation Sportage â€“ once again, a decent-looking vehicle itself. The concept came in an entirely impractical three-door SUV format, and featured a particularly interesting rear screen/tail-lights arrangement. The Real World, of course, would never tolerate such oddities and the resulting Sportage ditched the exciting bits. The LF-Ch concept (or â€œLexus Future-Compact hybridâ€, if you speak the language) was unveiled back in 2009, shortly before the Lexus CT 200h arrived on dealership floors. The conceptâ€™s styling was rather aggressive â€“ it hugged the ground and sported massive alloys, gaping front bumper air-intakes and tiny side-mirrors. When this hybrid hatch finally went into production, it retained the rough shape, but the sportiest design cues sadly went straight into the trash. In 2003, some three years after production of the Dodge Avenger ceased, the American automaker unleashed the half-SUV, half-coupe Avenger concept. It was so radical in its design (for the time, anyway), that even its makers admitted such vehicles were â€œusually seen only in video gamesâ€. The prototypeâ€™s body was particularly muscular, matched by a brawny a 3.5-litre V6 that sent its significant power to all four wheels. By the time the Avenger nameplate returned to the Dodge production stable in 2007, the vehicle had transformed into a humdrum sedan. Nevertheless, at least that V6 was still availableâ€¦ 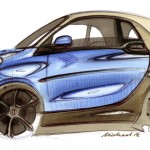