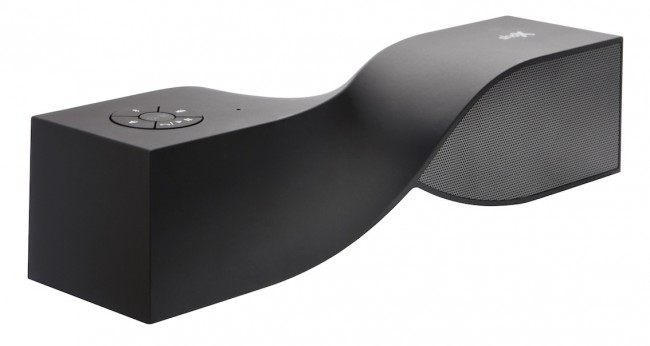 You know the Shox mini speaker. A golfball-sized speaker that pops open to make sweet ball-shaped music. You’d not use it at a ball, but it lets you get a bit more volume from your mp3 player or phone when out. It’s so small you can carry it anywhere. It’s the road warrior’s best musical friend. So now there’s a new twist on the idea… the Shox Twist. It’s a foot long rectanguloid with a half twist in it. Twisted. Spin. See what they did there? Oh, it was obvious? Okay. The Spin is a lot more sophisticated than the mini. It doesn’t fold up, and at 30-odd centimetres long it’s a lot less pocketable, but it has much better audio quality and Bluetooth to let you stream from across the room.

The Spin is a stereo speaker (unlike the mono mini), but with 3cm speaker drivers about 4cm apart, you’re not going to get a soundstage the size of the Albert Hall. Why Shox bothered with stereo is anyone’s guess, rather just bridge it and go mono. It still gets pretty loud, and produces a tight bass response thanks to the oval passive driver on the back — that, plus a little bit of gain from the surface it’s on.

That was my first question — why put little rubber foots on the side of the long end, and not also on the short end to let you stand it vertically as a space-saver? That would be great for a cluttered desk. Turns out you lose a lot of bass if you put it upright. Table gain, as it were.

The Shox Spin works as a full Bluetooth headset — yes, its got a small microphone that’s reasonably sensitive. Pairing it is straightforward, or you can hook it up via the supplied mini-jack cable. You may even prefer to use the wired connection — sound quality and loudness were distinctly better than with Bluetooth.

It has a built-in battery, recharged via a mini-USB plug (minor fail, I would have preferred to see a micro-USB plug, now pretty much ubiquitous). If you have the Spin cranked to full volume you do get a bit of hiss coming through when power is plugged in.

The Shox Spin even works as a full Bluetooth headset — yes, its got a small microphone that’s reasonably sensitive. It can even make a tolerable room conference system for a small business if you can’t afford the long bucks for a Polycom setup. Pairing it is straightforward, or you can hook it up via the supplied mini-jack cable. You may even prefer to use the wired connection — sound quality and loudness were distinctly better than with Bluetooth.

Since there’s not a lot more to say about this little guy, we decided to go the whole hog and do a tear-down. That and I didn’t have much to do last night. Component selection inside is of pretty high quality from reputable suppliers (CSR, Atmel, PAM), and case materials are high quality. The only niggle is that the sealing of the box is a bit sloppy. Taking some silicon sealant and dobbing it around the edge of the driver enclosure improves bass response somewhat (speakers prefer a good seal) as well as taking away a bit of plastic buzz at full volume. Note: only do this if you know what you’re doing, Gearburn is not responsible if you set yourself, or the Spin, alight). There is a lot of wasted space inside, so clearly the funky design came first — but this does make the Spin a little bigger than it needs to be, dropping it in a hole between ultra-compact carry-anywhere, and something a bit more beefy that you’d just leave on your desk.

Do we gear it or burn it? Close call, but it’s a Gear. It falls a little into the “what exactly is it for?” crack, and it’s a bit pricey, but its funky design and fine performance carries the day. Great Christmas present material.

The Shox Spin is marketed by Tevo (www.tevo.co.za), and is currently only available in South Africa for R600, but will almost certainly be exported to the rest of the world like the Shox mini. 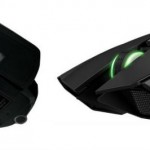