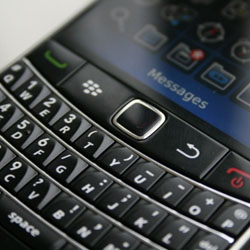 Hello, my name is Ryan and I have a problem. I have been struggling with this addiction for almost 2 weeks now and I can’t seem to shake it. The Blackberry Bold 9700 has taken over my life. It has seduced me into the BB universe and has quite literally hijacked my social circle. All who use it, swear by its convenience and ease of use, and I agree completely.

The Blackberry is inching ever closer to that elusive smartphone crown in South Africa. With more than three Blackberries sold for every iPhone, it seems as though the momentum is with Research in Motion (RIM) and they want to capitalise on it. The push for market share is understandable given the hype around the newly-released “JesusPhone”, the iPhone 4. With the arrival of the Bold 9700, the high-end market can adopt the Blackberry and feel completely justified with their choice.

The Bold 9700 is tagged as the businessman’s power phone, and before the release of the much-hyped Torch, it was the premium model in the series. The overall impression is fitting for a business model, with its sleek and flowing design and flush face. The device has a solid feel and lets you know that quality materials were used when creating it.

The TFT screen produces a vivid picture quality with 65K colours and a resolution of 480 x 360 pixels. At first glance, all information on the screen is easily legible and in good proportion to the size of the keyboard.

The Bold 9700 fits snugly in the palm of your hand. It is marginally slimmer than the previous Bold model, however it has been lengthened slightly. With rounder corners and all ports and keys lying flush, the 9700 gives a more streamlined appearance than previous models, where exposed keys and a bulging trackpad have been met with disdain. The optical trackpad, first seen on the BB Curve 8520, has been incorporated into the Bold 9700 for easier user navigation. There has been some mention of the reduction in keyboard size hampering typing. However I was undaunted and found my fingers navigated with ease over the qwerty keyboard. The keys are sculptured in a fretted manner and will assist the user in intuitively feeling his or her way over the keyboard.

The standard wireless additions are present: 3G, Bluetooth, GPS and Wi-Fi. On the left side of the phone there is a headphone jack, micro-USB port, customisable application key, while on the right there is another user-definable key (defaulted to camera) and the volume toggle. At the top of the phone there is a mute and key lock buttons encased in transparent plastic, adding a touch of class akin to a Bond gadget. I found these very handy and came into use often.

The back of the BB has a faux leather covering giving an educated and sophisticated feel congruent with a business man’s briefcase. The 3.2-mega pixel camera was very impressive with a good auto focus feature, 5X Zoom and a powerful flash. It was easy to initiate and gallery browsing was seamless to navigate using the trackpad. Oddly, my highlight of my bold experience was the holster and the ability the phone has to detect when it is safely nestled — a master class feature which I can see it saving impromptu falls from cracking screens and ultimately prolonging the life of the phone.

Once I got the hang of the device, it decided to get one up on me. A multitude of apps are offered to enhance the user’s experience and I took full advantage of this. Social networking, IM and email are all the Blackberry’s strong suite and I found some of the niftiest of the apps to help me out.

Blackberry Messenger and Facebook for Blackberry were the obvious choices and consumed the most time. I decided to use Ubertwitter as my twitter client as it was unanimously suggested by friends. If you require a more thorough analysis, you could refer to a previous Memeburn article and decide for yourself.

The Bold 9700 is truly customisable: wallpapers, side buttons, ringtones and apps — all with options that will make your Blackberry truly unique. After spending a while with it, installing a bunch of apps, dumping a world of mp3s onto the 2GB micro SD, the BB becomes a great tool and dare I say, a companion.

The overall experience with the Blackberry has been of constant communication and maintenance — the ease with which one remains connected to the world is awesome and at the same time slightly daunting. I’m not giving it back though. I must have “the precious”.