The commercial tsunami unleashed by the iPhone has served as a launch pad for the videogame industry world-wide, which hopes to seize on the success of Apple’s smartphone.

Hundreds of participants in the two-day Montreal International Game Summit that opens on Monday in Canada will be looking for ways to better milk the gaming market cow, in the face of Apple’s golden example.

In barely a year and a half, the iPhone has seized 20 percent of the portable gaming market and five percent of the global videogame market, estimated at some 50 billion dollars a year.

In addition to standard cell phone functions, the iPhone has an embedded camera, a portable media player and full Internet capabilities. It also provides third-party applications through its App Store, including games, social networking and GPS navigation.

“The iPhone democratised access to games, made it easy and affordable for consumers,” said Alex Thabet, CEO of interactive entertainment developer Ludia, a company based in Old Montreal.

“We’re talking about some 300,000 applications today on the App Store. So it’s an extremely competitive market that puts a lot of pressure on prices.”

In the last quarter alone, Apple sold 14.1 million iPhones, up 91 percent from a year ago. And the California-based company has described its latest model, the iPhone 4, as its most successful product launch ever, with more than three million sold in the first three weeks after its debut.

With some 100 million iPhones and iPods, it’s a huge market for videogames and in Montreal, seen as the videogaming capital of eastern North America, game creators are going all out to get an edge on this booming market.

Colour, animation, likable characters, all weapons are on the table to seduce iPhone gamers.

“It’s true that for iPhones, gaming is on a smaller scale. So you often have to exaggerate movements, making them more dynamic,” said Gamerizon animator Huu Le Nguyen.

In the heart of Montreal, iPhone gaming is making the fortune of Gamerizon, a young startup company dedicating all the talents of its mostly 30-some game developers to Apple’s smartphone.

The strategy has reaped rewards: over five million downloads and exceptional returns revolutionising the sector.

“They are very short games and because you can create them quickly, with a three- to four-month maximum development cycle, allows smaller developers to compete against their bigger rivals,” explained Gamerizon chief executive Alex Sakiz.”

“This is what we learned six months ago and it’s what we’ve been doing ever since.”

The move plays right into the hands of Yann Lee, a compulsive 36-year-old gamer. He already has some 50 car racing and other games on his iPhone, and the number keeps rising week by week.

“What’s nice is that you can try them out and it’s not expensive… a dollar for most apps. If you don’t really like the game, you can always tell yourself it’s just a dollar after all.” – AFP 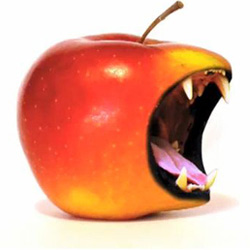