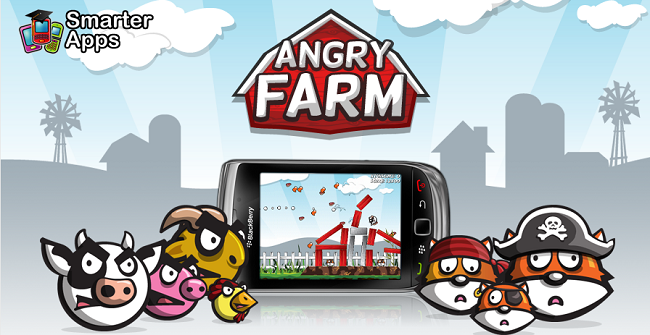 If you’ve been craving Angry Birds action on your BlackBerry, may we present erm… Angry Farm, a naming portmanteau made up of two of the most successful casual gaming franchises in recent history namely, Angry Birds and Farmville. Available exclusively for BlackBerry OS 4.6 and up, Angry Farm sees hapless farm animals having to defend themselves from from hungry foxes in the farmer’s absence.

In Smarter Apps‘ own words:

Help the angry animals fight back to clear the farm of marauding foxes. The angry animals are armed with a catapult and they fly through the air like furious birds before colliding spectacularly with the foxes who are hiding inside protective farm structures.

You’ve got to hand it to Smarter Apps who clearly possesses some serious moxie taking on Rovio with their blatant Angry Birds rip-off. I for one, laud these heroes who dared to take on such a crazy endeavour. While BlackBerry users stood with their noses pressed against the window, enduring mockery while Rovio happily chose to overlook BlackBerry OS despite public outcry in favour of the more illustrious Android and iPhone platforms. Adding insult to injury, even the now defunct Symbian received Rovio’s blessing.

As much as I admire Smarter Apps , you can’t really fault Rovio for having been stand-offish about developing for BlackBerry. Back at the BlackBerry Developer Conference, rumours arose that Rovio was planning to port Angry Birds to BlackBerry, but it hasn’t happened yet, and perhaps, with good reason. Even before game developing is considered, it’s a notoriously difficult platform to develop for, full stop.

With low-end hardware specs, slow adoption of 2D/3D accelerated software and graphics APIs like OpenGL and an evolving user demographic, developing for BlackBerry is not a particularly sane thing to do if you’re a power-house game developer, and yet, here we are with Angry Farm.

So what’s it like then? Well you’ll have to try it out for yourself, but I think it’s bloody marvelous. I took the leap of faith and bought the US$4.99 app – there’s no trial version – and to be completely honest, expected absolutely the worst. After loading it up on my 2 year old Bold 9000, I was pleasantly surprised by what Smarter Apps had managed to pull off. Technically the game is buggy as all hell, the physics engine is nowhere near anything Rovio managed to pull off on the iPhone, and every now and again game crashes dramatically, but you know what? I don’t care. It’s visually stunning, exhibited very little memory leakage, and is easily the most engaging game – apart from Doodle Jump – I’ve played on my BlackBerry.

There’s a lot wrong with the game, too much to go into detail actually, but it’s version 1.0 and if Smarter Apps can do this on my old BlackBerry without the fancy high specs and tech of the iPhone, I’m excited to see what these guys are going to do next, especially with what RIM has planned for the future. OpenGL ES will be coming to more devices, including the Torch 2, and RIM has already stated that gaming will be a focus in BlackBerry Messenger 6.0, and the future in general as they vie for the consumer market.

Should you buy it? Yes, by all means. You get 30 levels of gaming and free upgrades “forever”. Of course, the more people that buy the game, the more the overall experience will improve in next releases, so I choose to endorse the mayhem.

If you take the plunge here are a few tips:

Angry Farm will most likely be chastised for being a clone and being a sub par experience compared to Angry Birds on competing platforms, and who knows what legal heat Smarter Apps might get from Rovio in the future, especially since Angry Birds is rumoured to – eventually – appear on BlackBerry. In the meanwhile, if you’re a BlackBerry die-hard, pay no heed to the haters, and buy this game right now.