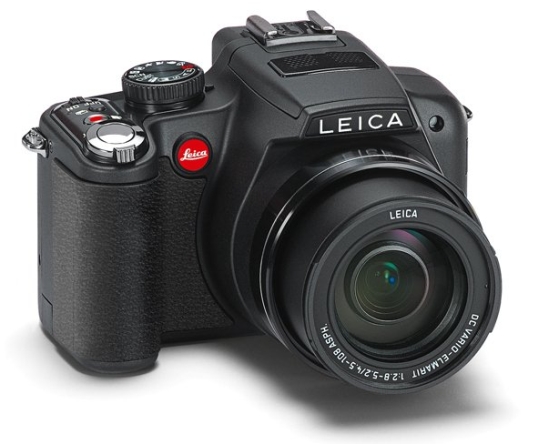 There are two kinds of photographers. Those that buy Leica cameras because those clever gnomes in the heart of Germany make some of the finest image capture instruments money can buy, and some buy Leica because they have money and can buy. In particular, they want to buy that infinitely desirable big red spot that says, “I. Am. Premium.”

And so when I opened the surprisingly pedestrian box the Leica V-Lux 2 came in, I was surprised a second time to find a rather plasticky, rather pedestrian-looking bridge camera inside it that didn’t say to me, “The best German design, engineering and fabrication on the planet.” No, it said, “Be careful, you drop, you break, no fix, understand?”

A bit of scratching around on the Global Inteweb, and all became clear. The V-Lux 2 is manufactured by Panasonic, which markets it as the FZ-100. Leica have added their red dot, fiddled with the firmware a bit, and marked up the price 50%. Luckily they were already mates with Panasonic, which often uses Leica glass in its higher-end cameras.

So. Spot anything familiar? Right. So global supply chains, outsourced production to attack new price points, designed and manufactured to our stringent standards of engineering and quality. We get it. So let’s park the whole badge-engineering thing for a moment, and look at the camera on its own terms.

And as a bridge camera that sits somewhere between a compact point-and-shot and digital SLR, it’s really rather good. Not outstanding, but you get a fantastically flexible zoom that gives you the 35mm equivalent of a 28-600mm lens, which because of the small area CCD stays pretty sharp the whole way. You also get 14 megapixels, and 1080i video (AVCHD format) that can run at up to 220 frames per second in 320×400 QVGA mode to check your golf swing.

It has a blistering frame rate for this segment, bursting at a true 11fps with mechanical shutter for 15 full resolution frames for sport, action or jumpy wildlife photography.

The electronic viewfinder display (as with so many of its bridge brethren) is a bit grainy and laggy, more of a status monitor than a real viewfinder The flip out and swivel 3” LCD display, though, is very sharp and bright.

Handling is very decent, although those with large hands will find the controls a little cramped, if not downright fiddly. The key switches, knobs, dials, toggles and buttons are sensibly laid out, however, and where you need a button (not a multi-level menu selection) you get a button, including a dedicated video stop/start button behind the shutter release for swapping quickly between motion and still photography.

Like so many digital cameras these days it’s feature packed up to and beyond the point of bloat, but luckily the Leica V-Lux 2 lets you customise button usage to your preference, and even though it has a million automatic features, it also gives you pretty much full manual control, even over things like second curtain synch on the built in flash.

Who would use it? Anyone that wants a little more control, a little more light (f2.8-5.2), and a little more flexibility than you get with the typical compact camera, but doesn’t want to lug around 30 pounds of SLR bodies and lenses.

News journalists that may need to grab a quick shot of the action. Sports buffs wanting to zoom in on the action. Wildlife enthusiasts looking for that pic of the lesser spotted whistling duck taking wing.

It has a lens to get you in close when you’re far away, a frame rate to get the shot when things are moving fast, and the flexibility to make a plan when conditions are not helping.

To give you an idea of what a 24X zoom means…see that gabled roof of in the distance?