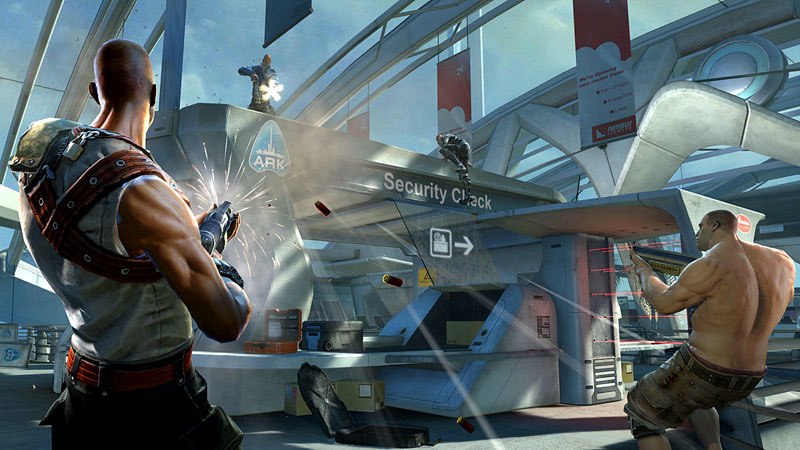 Review – Brink (Xbox360, PS3, PC) *Sigh* I really, really wanted to like Brink. For realsies and everything. But Brink makes it so hard. On the surface everything seems so perfect, but the more you play, the more things you find to dislike. And the things you do like somehow becomes less likable.

Brink comes from Slash Damage, the same people that brought us Wolfenstein: Enemy Territory and Enemy Territory: Quake Wars, both excellent online shooters from 2003 and 2007. Both games were class-based and objective focused, which basically meant that combat between teams tended to be concentrated on very specific portions of the map. Herding all the players to specific points meant playing solo was counter-productive and good team work was tantamount to victory. Brink has been created to provide a very similar experience, but with much cooler premise and design aesthetic. So let’s start there, as it’s one of the game’s few, yet still disappointing, positives. The game takes place on the Ark, a floating city that was constructed to house and protect humanity after the world is flooded thanks to… I don’t know what, ’cos the game isn’t really clear on that. Meant to house 5,000 people, but the Ark becomes overrun by 50,000. With minimal resources and space for all involved, the Ark is on the brink of civil war (see what they did there?). The story concerns this imminent civil war between two factions on the Ark, the Security Forces and the Resistance. Before and after campaign missions, you get a short cutscene that outlines the mission, and is also meant to elaborate on the story.

Now the idea of this conflict seems interesting — especially since you can view it from both sides — but it’s only hinted at in the cutscenes. Sadly, there is not enough meat for you to make your own inferences about the story, ala Left 4 Dead. Judging from those scenes, both the Resistance and the Security Forces have legitimate grievances in the conflict and there’s no clear villain here. That’s an interesting approach, especially for this type of game. In addition, Brink’s story also touches on things such as diminishing resources and environmentalism. It just doesn’t go far enough with it, only teasing you with a potentially good and topically relevant story. The other positive, the design aesthetic, also has a few minor let downs despite the fact that I think this is one of the best visually conceived shooters since Team Fortress 2. The character models have a slightly tamed caricatured look to them. Proportions are warped, but with just a hint of realism. And everything is so colourful, it’s like the Rainbow nation of FPSs. This comes into play rather nicely with the game’s extensive customisation options. There is a massive list of options for designing your character: clothes, faces, hair, tats, scars and body types. Body-types aside, the majority of these are wholly cosmetic. Oddly, despite the huge array of options, in the heat of battle the distinctiveness tends to disappear. It’s weird.

A Clean Campaign
Gameplay has two primary modes: Campaign and Freeplay. You can play the missions in any order, regardless of which mode you chose, so Campaign and Freeplay are exactly the same, except the Campaign has the story bits tacked on. The idea here, I think, is that Freeplay was meant to be the more typical online shooter experience, where you pick a map and then have at it. Campaign was meant to feel like a more linear single player game, except that the enemies you face, as well as your team mates, are controlled by real people. In practice this isn’t happening, as it doesn’t play any different to Freeplay.

Because Brink is a class-based game, there is very little room for lone wolf heroics. The classes have some affect as far as the actual head-to-head combat is concerned, in a way similar way to Team Fortress 2, but they play a bigger role in achieving your mission objectives. So only Soldiers can do demo work, only operatives can hack, engineers do repair work, and so on. With that said, there is a balance issue between the four classes. Soldiers can replenish ammo and throw Molotovs, and Operatives can use stealth and camouflage to get into tactical positions. But both those skills are tactically ineffective when compared to the turrets buffs of the Engineer and health buffs of the Medic. During play, it would be foolish to assume one of those roles, except when it’s required to accomplish a mission objective. Brink’s other innovation is its implementation of parkour for character movement. Basically, it’s possible to mantle over, slide under and wall run on obstacles. How well you are able to pull off these techniques depends on which of three body types you’ve chosen for your character: small, medium or large. I think its obvious how this would affect movement. Slash Damage has a made a big hoo-ha over this feature. It’s cool, but it’s certainly not a game changer.

It’s great having all these options, but if the basic shooting is a bit dodgy, then it doesn’t really matter, does it? Brink’s combat isn’t broken by any means, just a smidge imprecise compared to what we’ve become accustomed to, thanks to years of Call of Duty. It may well be that years of snap-to targeting has made me rusty, but drawing a bead on an enemy just seems overly difficult. And while the game has a great selection of weapons to choose from, there aren’t any tangible advantages with one weapon over another, aside from clip size. In truth, there are really only four choices, pistol, assault rifle, heavy machine gun and shotgun. Pick the shotgun, I promise you won’t be sorry. BTW, you body type can limit your choice of weapon.

Oh, and I almost forgot Challenge mode. Challenge mode is four maps that are essential to unlocking a large portion of the game’s weapons and customisation options. You should start here, as it also acts as a primer for how the game in general works. Be advised: the unlockables are only released when you play this mode solo. Don’t be one of the players that spent hours doing this mode with three buddies for zero reward.

It should also be mentioned that, ideally, Brink should be played online. Depending on your country and access to the game networks, this can be a bit difficult. With the PSN down, I managed to get in a few online matches, and having other real life players with you is a massive improvement of the bots, but it does not erase the game flaws.

Final Shot
Ultimately, Brink is a game with a lot of really good ideas that are almost but not quite completed. The game feels unfinished in every aspect. You feel as though there is supposed to be more story, supposed to be more differentiation between classes and guns, supposed to be more maps, suppose to be more. My sense is that this is not the game that Splash Damage had intended to release, and that, in all likelihood, this game was rushed out to meet a release date. In an odd way, Brink reminds me a lot of the first Assassin’s Creed: a great idea that wasn’t carried through to its full potential. Like Assassin’s Creed, it’s really a US$50 demo for a much better game that may or may not be released one day.