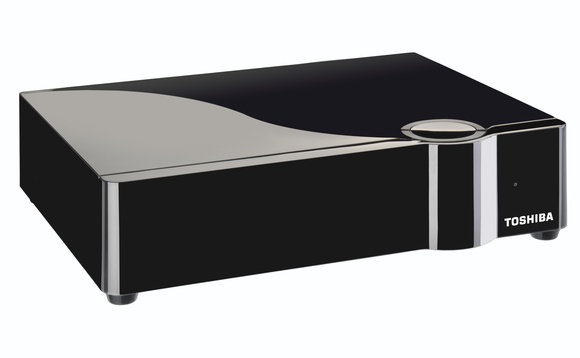 Review: The Stor.E TV+ is an external drive slash media centre. It’s clumsily named, clumsily built, and clumsily supported. So at least Toshiba is consistent there. It would make a great story device for a Dilbert special – the grubby fingerprints of corporate politics are all over it.

Did we mention the user interface and lack of attention to detail? Yeah, it’s pretty bad.

But first let’s look at what it does well. It’s the least we could do after the Toshiba hardware guys went to so much effort. You get either a 1 or 2 terabyte hard drive in a glossy black media player case. Round back you’ll find the HDMI out, coax audio, composite video and stereo line out. It has a port to act as USB host for the supplied Wi-Fi dongle or external USB, optical or flash drive; and a Type B USB port to slave it to your PC. On the side is another USB port and media card reader.

On the front, nothing but a small mono interface display. Not even a power button. If you lose your remote, it’s toast.

It is fairly smart looking, if uninspiring, so not out of place in your lounge. It’s also not that quiet.

When you fire it up and get through the laborious boot process, you get to the innards.

It supports most audio formats, including FLAC, but is a bit scanty on the video side – omitting DivX and Xvid (hardly obscure formats) is strange. M4V files from iTunes will play but you have to do a tedious manual rename to MP4.

This is just one of the many, many little glitches and sloppy work you’ll have to put up with.

The archaic interface is just terrible. Really a shocker. Oh my gosh, is it 1995 already?

You get a maximum of eight file or folder icons on screen at a time, arranged in two horizontal rows. What fun it makes scrolling through long media libraries.

Being fundamentally Linux under-pinned, it is good at mounting volumes, whether external physical drives or networked drives. The wifi dongle works perfectly, and it’s pretty elementary to connect to a network, and even hook up UPNP devices to stream sound and video, although you can’t do simple things like OTA firmware updates.

This isn’t a real-world problem, as in the year or so it’s existed, Toshiba hasn’t bothered releasing a single firmware revision, despite the multitudinous bugs and oversights that need fixing.

Neither does Toshiba bother replying to bug reports, questions or any of the increasingly more plaintive requests on its support forums.

It supposedly has the Samba file sharing system built in, but connecting to it through a Web browser brings up a piece of demo CGI script that lets you add two numbers together. Getting back to what it does do well – sound and video quality is generally excellent, no problems there, especially up-sampling and smoothing low-quality video (I downloaded that 700MB Black Knight rip, but never watched it, honest).

And just as I start to nod approvingly, I find the HDMI connector would not talk through my Marantz AV receiver, only directly to the display.

Basically it’s a poorly finished product that could have been good, or even excellent. If you’re willing to put up with the niggles or you want to hack it to make it into the product it should have been it should serve you well. But you shouldn’t need to.

Do we Gear it or Burn it?

We Burn it, and cast it into the pits of Burningness.

Toshiba launched this device, but clearly doesn’t give much of a damn about it. A shame really, as it has promise.

We would guess that some bright spark at Toshiba headquarters in Tokyo took a proposal to management a few years back, saying “Look, we make hard drives, we started making external hard drive enclosures, it’s a hop, skip and $10 worth of extra electronics to make a media centre, and we can make a brilliant profit margin when we flog it.” And then, in a pure moment of Dilbertian corporate shenanigans, the project manager was moved, the team restructured, the budget cut and the engineers told to finish whatever they were doing and get it out the door. Finished or not. And then the whole company put its fingers in its ears and never looked at it again.

No updates, no support, no love. Gearburn tried to ask Toshiba about some of the issues we had, but got no response.

Bottom line: if you’re a regular person looking for a good media player, look elsewhere. If you’re patient and a tweaker, the Stor.E TV+ is worth keeping an eye out for, as these benighted things should start appearing second hand or at bargain prices as resellers look to shift unsold stock.