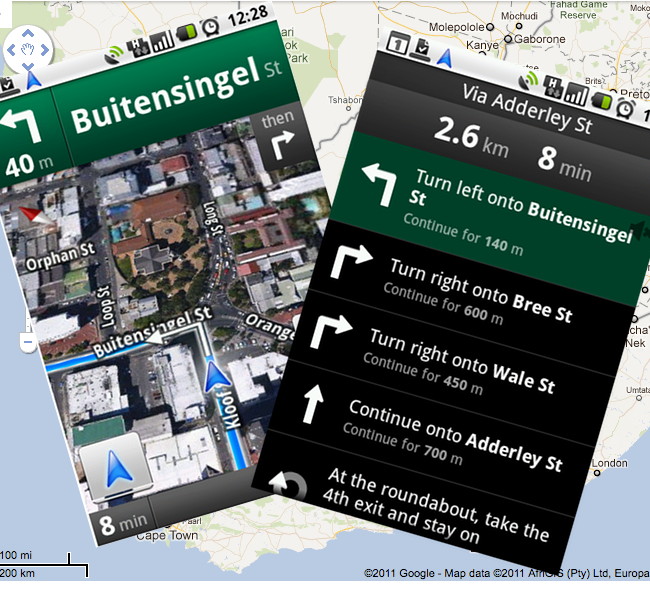 Not only is it free, feature rich and increadibly useful, but Google has added a real kicker with this product in that Maps Navigation can still do its thing if your phone loses its internet connection.

“Once you’ve connected and identified a route, it’ll pull the map offline and you can use it,” says Google South Africa’s head of mobile, Brett St. Clair.

Having the map offline means that navigation can continue, using the phone’s on-board GPS facility. Even if GPS signal is lost, however, Google claims the system can still navigate you to your destination.

“It will make use of other points of reference like wi-fi and cellphone towers,” says St. Clair. Maps Navigation includes some other snazzy features. As a result of it being Internet based, it will always have the latest maps, which now include 3D images of large landmarks in the area. The integration of voice search means that if you need to suddenly change your destination, you can do it just by saying so at the next convenient traffic light.

The system also includes an option to navigate in a 2D satellite view using images from Google Earth, as well as the ability to use the Google Street View function in real time. The system is designed to switch to Street View as you reach your destination. The option of being able to display a screen listing only upcoming turns is also a winner. There are still some reliability issues. On the launch of the product locally, the test phones pre-loaded with it had to be rebooted when, at one point, there was a transition in the satellites which the phone’s GPS was receiving from.

Another issue is the fact that the service doesn’t appear to have a pedestrian mode for SA yet. This is all well and good if you’re the kind of person who user their car for everything, but not if you’re navigating a city by foot, as you’re going to be consigned to the same routes the motorists – including routing around one-way streets.

Additionally, the service doesn’t seem to realise you’ve arrived at your destination when you don’t follow its exact car-oriented routes. As such, you won’t get the promised automatic Street View, which is designed to confirm that you have, in fact, arrived.

The service can also exact a heavy toll on the battery life of your device, particularly if the map is updating online.