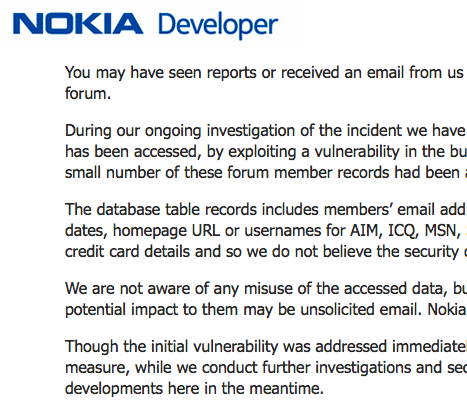 Nokia said Monday a database for a developer forum it operates had been hacked and some member information accessed. Information hacked from the developer.nokia.com forum included email addresses and some usernames, birth dates and URL addresses.

“However, they do not contain sensitive information such as passwords or credit card details and so we do not believe the security of forum members’ accounts is at risk,” Nokia spokesman Doug Dawson told AFP.

The hacking of the forum was made possible through “security flaws” on the website, Dawson said. The attackers have been reported to have used a SQL injection attack.

Nokia said it had taken the site offline while it looked into the security breach, apologising for any inconvenience to the developer forum members.

Nokia did not say when the website would go back online.