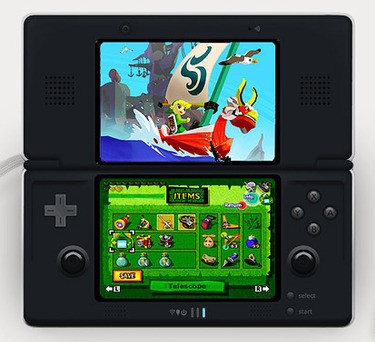 Nintendo unveiled a string of new software titles at a highly anticipated Tokyo trade show as it attempts to boost sales and reignite interest in its struggling 3DS handheld games console.

Nintendo shares however tumbled more than 5 percent on the Osaka bourse with investors underwhelmed by the video game giant’s attempt to boost the 3DS, after it slashed the console’s price by up to 40 percent six months after launch.

The company will also strengthen the functions of the console to enable its camera to take 3D movies, while releasing a pink-coloured version in what it said was an effort to attract more female users.

Nintendo unveiled 43 new titles to be released in Japan, including 33 for the 3DS, which offers 3D game play without the need for special glasses.

The titles include four new entries to the wildly popular Mario series and nine games for the Wii home console.

Nintendo President Satoru Iwata said the software lineup, to be released late this year and next year, was “unprecedented in the history of video games” as the company looks to attract more users to the successor to its DS console.

But the market had expected the conference to underwhelm, Eiji Maeda, an analyst covering the entertainment sector at SMBC Nikko Securities, told Dow Jones Newswires, with some titles fanfared ahead of it.

New games to be released in overseas markets will be announced in due course, a Nintendo spokesman said.

The announcement came after the company announced price cuts for the console by up to 40 percent within six months of the product launch in order to boost weak sales that reflected the lack of heavy-hitting game software.

But the impact of the price cut proved short-lived and the console continues to struggle, according to industry sales data.

At the end of June, 3DS game titles came to 40 in Japan, 36 in Americas and 33 in other regions, mostly Europe.