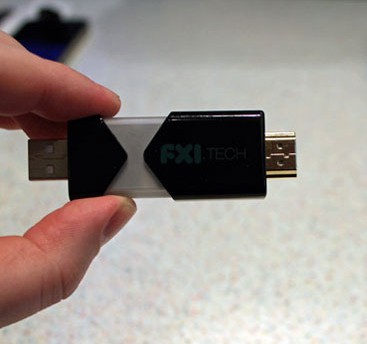 File this under, “Oh my word that’s cool.” A previously unknown Norwegian company called FXI Technologies has demonstrated a working prototype of its “computer on a stick”. It looks like a standard flash drive with an extra HDMI port opposite the USB plug. Stick it into a TV via HDMI, or into the USB port of a Linux box, PC or Mac, and it takes over the environment and lets you get on with your cloud computing via its own built-in Wi-Fi radio. It can also take up to 64GB of additional storage through a microSD slot.

Code-named Cotton Candy, it has a 1.2GHz ARM Cortex A9 CPU and a GPU that can drive a 1080p HD display via HDMI, and Wi-Fi and Bluetooth radios for connectivity. Running Android, you can either hook up a keyboard and mouse via the USB side and display on a regular HDMI-capable TV to access your cloud-based services or stored apps. Alternatively, plug it into a PC or Mac and it will take over the keyboard/mouse and display using FXI’s “Any Screen Virtualisation Protocol” from within a virtualised environment. You can even interact with the VM from the host OS, dragging and dropping files onto its file manager.

FXI is currently talking to various companies about manufacturing and marketing the product, and expects to go into full-scale production to have it in the hands of consumers by mid-2012. Pricing is expected to be less than $200.

Now if they dropped the ‘PC onna stick’ idea, and put the Any Screen Virtualisation Protocol onto mobile phones, that would be one less, not one more, device to carry around with us.

There are other “computers on a stick” out there, including the credit card-sized Raspberry Pi, which was developed as a charitable project with the idea of selling for $25, but without the virtualisation capability or built-in wireless networking. 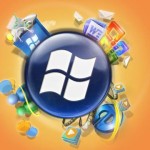