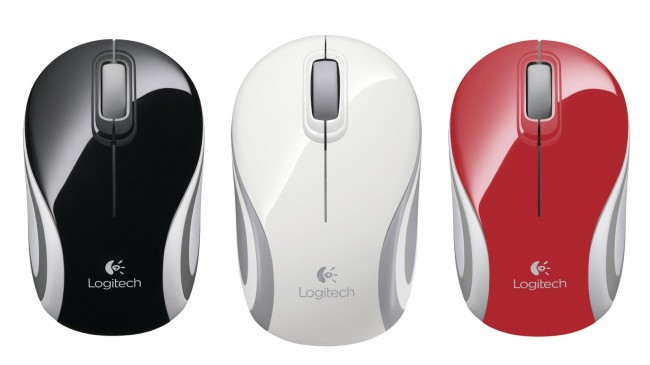 I barely felt it move in my pocket. A tiny red nugget, the Logitech Wireless Mini Mouse (M187) isn’t the best mouse in the world, but lord have mercy if it ain’t the smallest.

The mouse is usually the final hardware option users consider after purchasing a bleeding-edge laptop or desktop computer. But why?! It’s the single most important purchase after a USB vagina. I’m deadly serious.

So it’s a teeny little mouse practically swallowed in my ginormous hands. It’s a red jewel of control which runs on a single AAA battery and fits between a half an apple and a bar of small soap, size-wise. Despite the mini-me proportions, I think it’s freaky, but I like it a lot.

More often than not, I get swept away with the look and feel of my gadgets. The M187 is no exception. I adore petite gadgets, the way they become lost in my hands is a special pleasure of mine. Knowing that I can crush its little robot soul if I become angry is another sick pleasure I enjoy.

So it’s pint-sized. It’ll fit anywhere and is seemingly made for laptops. Pop it in your laptop bag and you’ll barely notice it’s there. So far, plus one for the M187.

Logitech did well by reducing the size of receivers into the tiny USB-nubs which they are today. Remember how big USB receivers used to be? Let me show you:

Huge right? Now look at the size of Logitech’s effort: Tiny, right?! It’s wireless, is almost impossible to snap off and remains all but hidden when attached to your PC. Another plus.

Cords are so last decade. Maybe it all began with the Xbox 360, maybe it began with mobile phones but wherever it is now, I want it to stay that way. I despise cords, it’s just another little niggle which gets in the way of our daily lives and the sooner we can enjoy widespread cordless power options, the better.

Right, so the M187 is a 2.4Ghz wireless mouse and can be used from up to 10 meters from the source nano receiver. The single AAA battery which charges it is supposed to last for three to six months. It’s great, don’t change a thing, Logitech.

Buy it now. It’s roughly US$16 and better than your current mouse, FACT. Hell it has a scroll-wheel and two buttons. One for left-clicking and the other for right-clicking, like, whatever man. God, there are no buttons on the Magic Mouse so it’s a win for the M187. I’m going to go caress it again.

Disclaimer: the above sentence is utter nonsense. Great little mouse though, and highly recommended as a travel mouse.