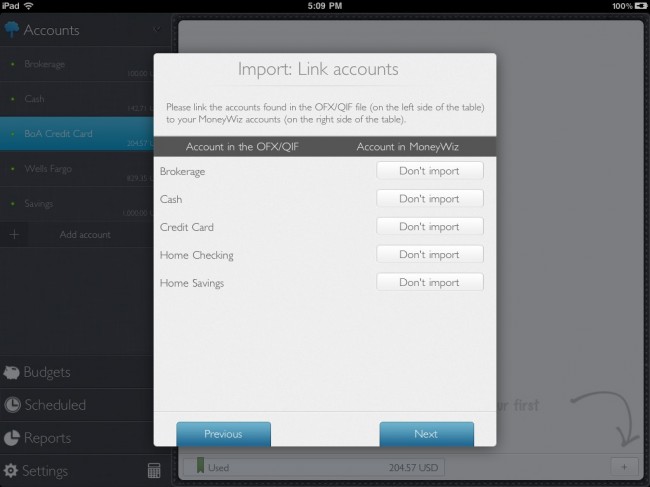 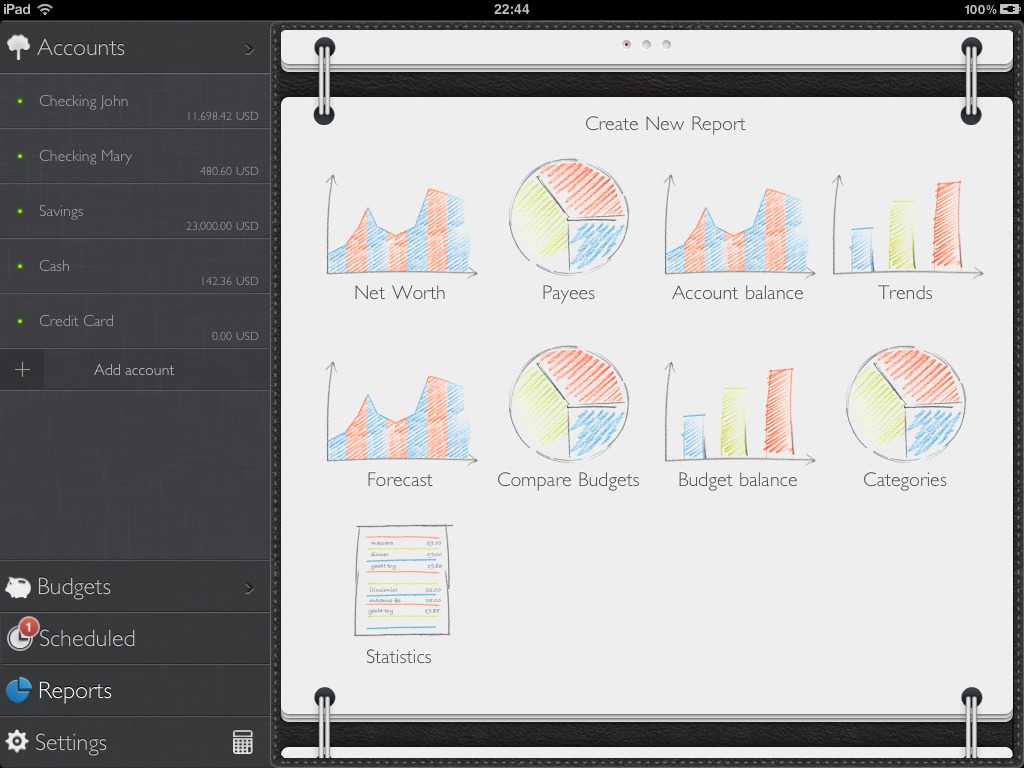 This week I take a look at MoneyWiz, an amazing new personal finance app available on both iPhone and iPad. “Really? Another damn expense app?” I hear you say. Yes, but I can promise you that this is the last one, I really have found what I’ve been looking for since I became so obsessive about recording my expenses. So before you click back to Pinterest, or continue importing your photos from Instagram before Facebook uses them without your permission, educate yourself in the fine art of perfection.

Ever since I got hold of my iPad, I’ve been thinking about how awesome it would be to sit on a Sunday evening, with a nice glass of red, making sure my finances are up to date before starting the new week (it’s the little things). To me, the larger screen on the device just begs for beautiful graphs, detailing the various incomes and expenses that have occurred over a certain amount of time. But for the life of me, I just could not find any iPad apps that would give me what I wanted. When I eventually happened upon MoneyWiz, it was by complete chance, and I really thought it was too good to be true. A personal finance app for both my devices that synced between one another automatically in real time? Shut up and take my money! 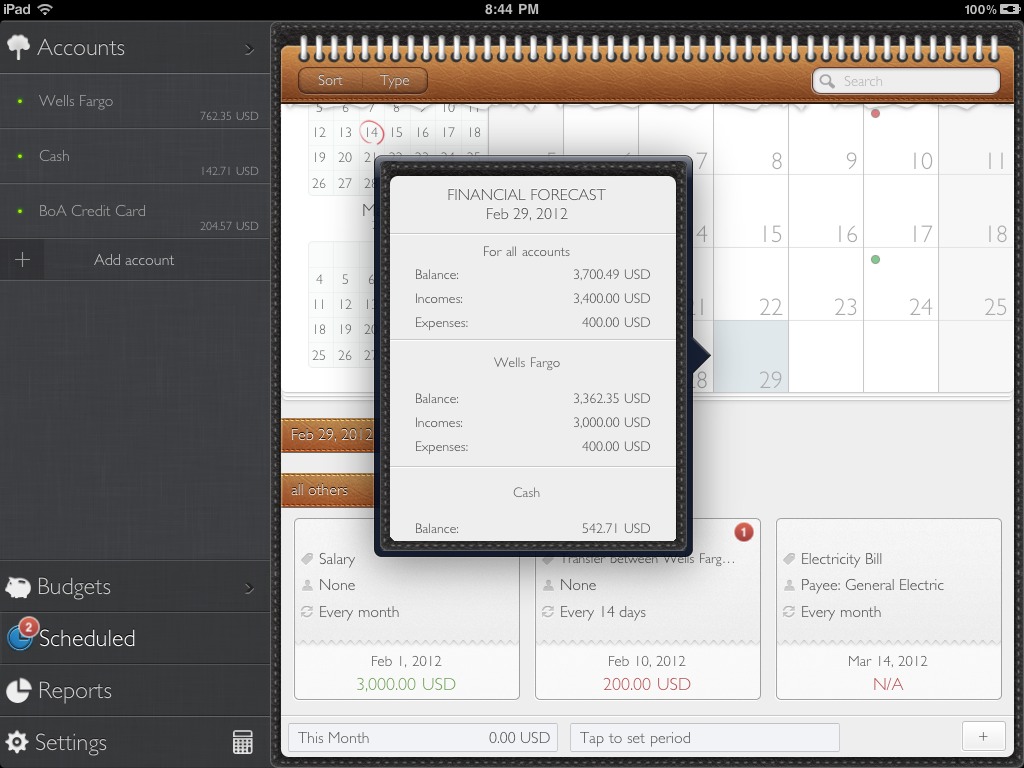 On that note, before I begin, MoneyWiz is definitely a bit pricier than most of us are used too (well, for iPhone apps anyway). The app is not universal, which means that you pay US$4.99 for each app, which could put you off initially as its is not everyday that you drop ten dollars in the app store, but you need not have both versions for it to work. I would recommend getting the iPhone version first if you’re a bit hesitant, as it is the one you will use most in the end, and you can always sync your existing data to the iPad version when you realise you just can’t live without having all your financial info at your fingertips. Trust me though, when you witness the real time syncing between your two devices, those ten dollars will feel so worth it and you’ll be able to give yourself a mental hi-five for making such an awesome decision.

Okay so let’s get right into it, MoneyWiz is a well designed and amazingly functional app that can be as complicated, or as easy to use as you want it to be. It allows you to setup custom categories and sub-categories, as many as you like. The budgeting function is surprisingly customizable and unthreatening, allowing you to setup every single element to your preference, and the visual representation of your various budgets is also deceptively simple and beautiful.

Scheduled and recurring transactions are handled amazingly well, and I love the way it tallies these amounts and shows you your fixed expenses for your upcoming months. Reporting is also done incredibly well on the app, and the developers have included a number of standard reports that can be used for quick reference. You’re also able to build custom reports that can be saved and run on certain dates, they really have thought of everything here. Entering expenses is also a dream, especially the fact that the app records all your payees and allows you to choose from a list instead of typing the name out over and over again. MoneyWiz gets to know you over time and becomes simpler each time you use it.

The iPad version is very similar to the iPhone version although it has been designed for a different purpose altogether. Whereas you will use the iPhone version to record transactions on a day-to-day basis when they occur, you use the iPad version to view the reports and reconcile (in the very well designed and easy to use reconcile mode) your expenses against your bank statements. It also comes with an onboard calculator that also doubles as a currency converter linked to real time rates (great when you’re keeping track of the many credit card transactions that one makes while abroad). 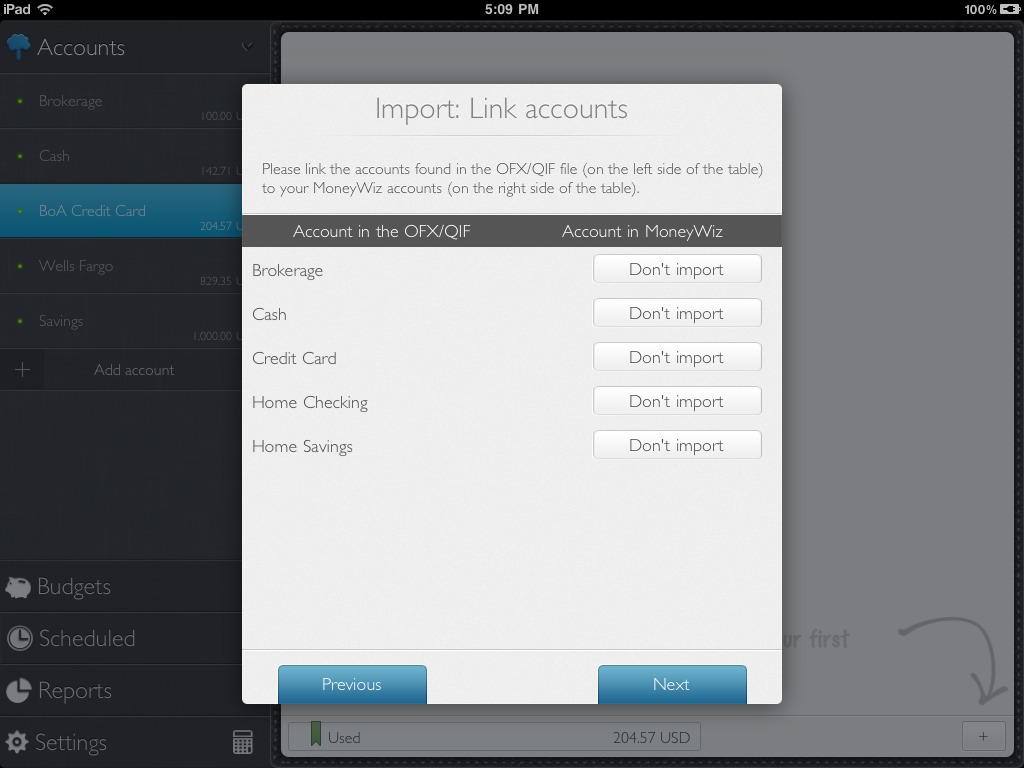 As I mentioned earlier, the real beauty of MoneyWiz is how the two apps work together to give you complete control of your financial situation. When setting the app up, you’re asked to create a MoneyWiz account which you sign in with on both devices. Once you’ve done this, anything you do on the one device is immediately mirrored on the other, so you’re always on top of what’s happening. There is also a Mac app being released very soon which, I’m sure, will join in on all the syncing fun as well. Keep an eye out for a full review when it launches.

To finish off, I can honestly say that I no longer use any other finance apps on either device and that I’ve never been happier with an app before, no matter the category or function. MoneyWiz does everything you want and more, and the developers behind this masterpiece are constantly adding new features and keeping its users happy. If you’re looking for a clean and easy-to-use app to help you stay on top of your financial position and out of the red, MoneyWiz is undoubtably the best on the market, and I’ll tell you now that nothing comes close to it.