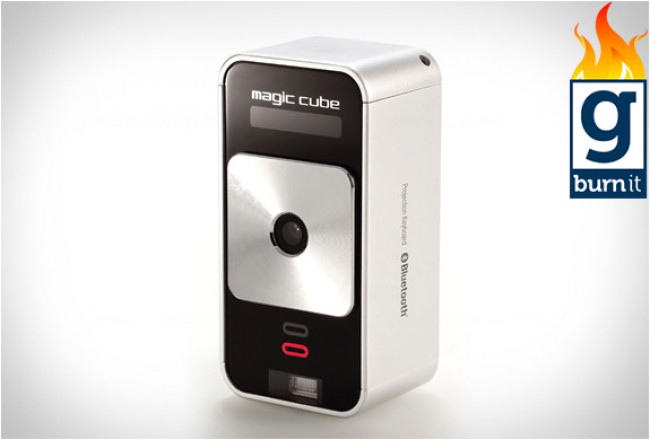 Everyone wants a virtual keyboard and anyone who says otherwise is lying. Seriously, what could be cooler? When I got handed the virtual keyboard to review I squealed a little. My Matrixesque dreams were finally coming true.

Since I was eight-years-old I have been waiting for hovercrafts and in-brain wireless technology. I feel technology is taking its sweet time to catch up with my ambitions. The virtual keyboard isn’t the revolutionary tech I yearned for but it’s a start.

So here goes my ride with Magic Cube from Celluon.

The tech that enables these kind of laser-based keyboards has actually been around for a while. So unfortunately the future has been here, it’s just been chilling. But seriously, what could be cooler than having a laser keyboard on any flat surface? You get to tap the surface of your desk with genuine reason.

The Magic Cube is easy enough to get going. It connects to your Mac or iOS-powered device via bluetooth and features a battery which powers the laser and optical recognition systems. It works quite simply, an infrared signal detects your fingers as they make contact with the virtual keys then relays text entry to the device you’ve paired it with.

The virtual keyboard worked brilliantly even in bright rooms, but has a knack for freaking out when you type too fast. Which is ironic because, according to its maker, the keyboard has a recognition rate of up to 400 characters per minute.

Unfortunately, the more I used the keyboard the less cool it became.

For a device that is supposed to be Android friendly, it took a lot of time to pair it with my Galaxy SII and the connection only lasted minutes. I was only able to use it successfully on the iPad 2. Also, this device is meant to be ushering in the future, yet the keyboard is very PC-centric — it doesn’t even have a “.com” button. Call me crazy, but that’s what future tech needs to have. Yes, I care about stuff like that. Sure, it’s accurate, but so what?

The Cube’s 700mAH lithium-polymer battery is so-so depending on the type of user you are. The battery lasts for 150 minutes of continuous typing, which isn’t very long if you’re at a conference or penning your memoir.

I am afraid I am going to have to burn it. Ultimately, if I am going to spend around US$160 on a keyboard it needs to wow me — the bloody thing better sing me showtunes. There is very little magic happening with the Magic Cube and in essence you’re paying for a future that is yet to arrive. It doesn’t offer any real reason to not use the touch keyboard on your device, as text entry is not significantly faster than the native keyboard.