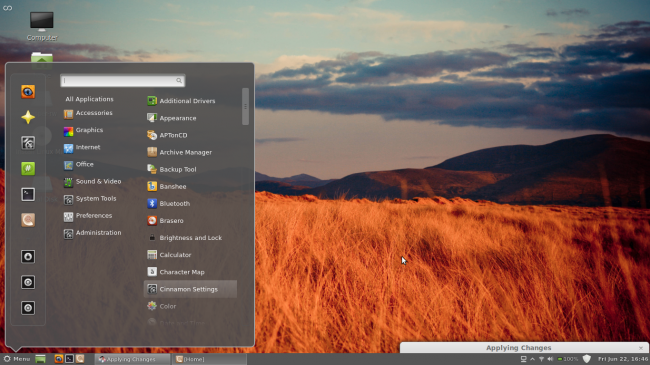 Recently I’ve reviewed the latest ‘consumer’ version of Ubuntu, namely 12.04, and found that it was pretty far away from being perfectly consumer friendly. The entire UI was scattered and disorganized, you were met with hundreds of updates and it wasn’t very easy to install anything. Then one of our readers suggested I review Mint 13 Cinnamon.

I installed this version via USB as well as it is the easiest way to run and test Linux, sometimes it may be slow especially when installing certain apps, but it runs smoothly. After the initial boot up which was way more pleasing to the eye than the Ubuntu one (no DOS like the reviewer from eTV said). It took longer to boot than Ubuntu, but it’s hardly noticeable. The desktop interface was a breath of fresh air. Everything seemed to be in its right place and if you were to switch from Windows XP to Cinnamon you wouldn’t have any trouble. There is a taskbar at the bottom á la XP and your icons are nicely arranged.

The UI is clean and although it offers you a bunch of options under one of the few system preferences menus I would suggest you stick to the standard version. I’ve never been a great supporter of user customization options. If I were in charge the only thing you could change would be your background. The ‘menu’ or ‘start screen’ is just like you’re used to. This makes me feel like I’m back on Windows XP but with a nice theme installed. A nice array of apps come pre-installed like Libre Office, VLC Player (never been a fan) and more. However they over did the pre-installed apps a tiny bit by including way too many options for music and video. VLC should be sufficient but they went ahead and included 5. Overkill much? Luckily MP3’s just worked and I didn’t need to download (and fail at that) more codecs. Do you hear that Mark?

The software center is again totally different from the one you’d find on Ubuntu. This version likes to call it ‘software manager’ which I initially thought it would be a place where I could uninstall and manage my programs on the PC. But I was wrong. The App Store, or whatever they prefer to call it, had 59k apps available. For a Linux store I’m quite impressed and seems like there are great interest in developing for this platform.

What I was pleased at was the ‘hot corners’ on this version. In Ubuntu it was a button on the dock to the left which you pressed and 4 desktops would show up. Here you hover to the top left corner and you will be met with 2 desktops and an option to add more. I don’t really see the benefit of multiple desktops, but then again I use Windows 8. As a test I installed Minecraft on Ubuntu, and found it to be insanely difficult and time consuming. So I did the same with Mint. Luckily I didn’t have to download even more stuff this time round, but it still kept opening it in the archive manager unless you chose Java Runtime. And lets not forget giving it permission to run via settings. I would much prefer them to give you an option when you double click an app to give it permissions right there instead of confusing everyone.

But the whole experience was pleasantly improved on Mint. Firefox still seems to break certain sites like mobile browsers do. Although Firefox on Windows work perfectly fine. Ubuntu had the same issue and I find it weird.

Security options surprised me here: the Firewall was turned off by default (think XP when it was released, what a nightmare). I turned that on but it should be an oxymoron.

The amount of different places you need to go to change system settings is still a problem: I counted 3 different places where you could change simple things like background, theme, and others. For some reason these have to be separate and I find it silly. Linux Mint 13 Cinnamon is amazing, It’s fast, it’s simple to a degree and the UI is really beautiful. However, it still can’t take on Windows. There are still way too many loopholes to go through to make things work. If you need a basic OS to give to your grandmother who isn’t insisting on Windows then go for it. Just make sure everything is easily found because they will get lost in between all those different app pages. I wouldn’t hesitate one second to give my sister or mother Linux Mint if they didn’t use Office day in and day out.

Another problem with Linux is that there are way too many things to press, and we all know how the average person on the street loves to click everything while ‘exploring’.

With Mint being pushed via the ‘Mint Box’ hopefully this version won’t fade into the background like all the rest. This Linux is not unified and it’s a constant fight between UI designers who would be better. Mint is an improvement and I love this but really guys, like I said, work together.

I would say Mint is my favorite Linux Distro yet. I feel almost attached to this version as it kind of pulled me now. But some glaring ommissions prevent me from switching. Seems like it’s Windows 8 for now, unless Microsoft and the FOSS community bring Office (and proper Office not open source crap) to Linux. Only then I would have a reason to switch.