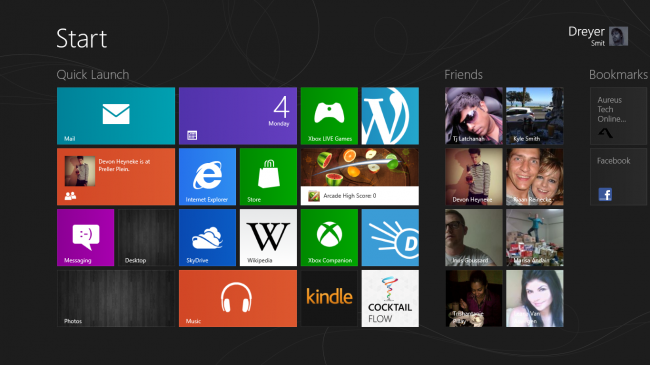 I’ve been using Windows 8 permanently since the first Developers Preview in September last year. I was interested to see how the latest iteration of Microsoft’s iconic OS would function in a day-to-day desktop environment.

A lot has changed since the first preview and Windows 8 is starting to look like a viable platform and upgrade if you’re using Windows 7. From day one everyone, including me, was extremely jarred by the new Start menu. It was in your face, the apps were lacking or non-existent and it was just plain ugly. Fast forward to today and it’s definitely grown on me.

The vision behind Windows 8 is quite simple: a unified interface across tablet, desktop, laptop and phone. And it’s quite brilliant. You might say that Windows 8 does not work on a desktop or a laptop but you will be mistaken.

Microsoft literally changed the way you do things so that you can get things done faster. In Windows 7 for example, most people find an app in one of the 100 folders in the Start menu. It had a search function but it was not prevalent and it went mostly unused. Microsoft placed search front back and center in Windows 8. Now to find something you can either press start and search and your app would pop up, or click start — right click — all apps and you’ll see everything listed alphabetically. What makes it easier is that you don’t need to focus on a small portion of your screen. Everything is right there in big bold letters. And most users run applications in full screen any way.

In a world where displays are getting smaller and resolutions higher, a redesign of the UI is necessary. A 1600p Retina Display Macbook Pro should arrive sooner rather than later and with a 13-inch display using it may become a slight problem. Back in the days when our 15-inch displays could only manage 640×480, text were gigantic and you could manage. Imagine a resolution higher than your Full HD TV on an 11-inch Macbook using the classic Windows 7 UI? I had a look at the Asus Zenbook U31X this weekend and with the 1600×900 11-inch display the elements were extremely small. And Asus is outing a 1080p 11-inch soon. This is a major problem. Microsoft went with the Metro UI because it will look great even on a 1600p display.This clearly changes everything and you’ll be a fool to believe otherwise.

After the 20 minutes of waiting for the clean installation you are met with the usual basic tile layout. Nothing fancy and all the basic apps to get you started. If you’re using Windows 8 Consumer Preview all your settings including your desktop wallpaper, Facebook login details, search history, IE passwords and usernames will be synced and you’ll be ready to go. This works via Skydrive and I was quite surprised to see it all happen. I even freaked out for a few seconds when IE remembered my Google Account details because it was a clean install. The desktop will remain the go to place for everyone including myself for the time being. It’s been overhauled and the entire UI was changed. Subtle differences including the close, maximise and minimise buttons to the removal of the aero effect. You can enable transparency but it’s no longer the Aero glass you have come to love in Windows 7. It’s actually pleasing to the eye and I have transparency disabled because I enjoy the solid colours more.

Features like built in ISO support, Hyper V, and the universal share port come in very useful. Native support for PDF, DOCX and most video and music files (sorry no native MKV support) makes it unnecessary to even download more software, unless you wish to create these files. IE 10 has built in Flash support ensuring that it remains up to date at all times. Windows 8 also includes a full Security suite. You can install third party security software but it’s unnecessary. If you’re running Microsoft Security Essentials on your Windows 7 PC you’ll be good on Windows 8.

IE 10 includes Anti-tracking software and it is turned on by default. This means that from day one you will no longer see most online ads. Google and other ad companies install tracking cookies on your computer to track and see which sites you visit so that they can show more relevant results. I for one think this is awesome and I laud Microsoft for this move. Some may think this is too much. Performance wise Windows 8 is the star of the show. Booting after removing the battery takes a mere 20 seconds on a Core i5 Notebook with a standard SATA 2 hard drive. Using a SSD drive will get you something like a three second boot up.

An app for everyone

The App Store is still a bit bland at present with only a handful of interesting apps. I immediately downloaded Kindle, WordPress, Wikipedia and my favorite game Fruit Ninja. The App store still seems to be closed down and most apps available are test builds. I would like to see the store go live and get more apps. I would like to see Tweetdeck. There are Twitter apps like Rovi but they have kind of overdone the Metro style interface to the point where it’s overpowering and completely unusable. The built in Social app, ‘People’ have come a long way and so far I haven’t had any trouble with it. It’s fun pinning your favorite people on the Start screen and getting their updates without even blinking. I would still like a ‘Me’ tile like in Windows Phone so that I can easily update my status on multiple services. I don’t know why this hasn’t been added yet. It is pretty much the most used feature on my Windows Phone.

The Music app still does not recognize my Zune collection and playlists. Microsoft should fix this soon if they want people to stop using the desktop. Right now the only reason I use the desktop is because of Office and Zune. All my other work is done in Metro. The app is beautiful and playing your standard MP3 music collection (including your iTunes collection) is bliss. I stopped using iTunes after getting this app. The Messaging app is one of Windows 8’s best features letting you chat to all your friends through services like Facebook and Live. I would like to see Microsoft integrate Skype here as running more than one app for messaging is so Q3 1999. Microsoft should leverage their dominance in this area and integrate every service into one place. This app is a nice start.

The Photos and Calendar apps haven’t changed much. They remain utterly useful. Making any changes on your Outlook, Windows Phone, Live or Facebook calendars will automatically show up in the Calendar app and your photos from every service imaginable is visible in the Photos app. Only tiny problem I have with the Photos app is that you can’t delete a picture from within the app.

A winner is Windows 8

Windows 8 Release preview took what was great in the Consumer preview and added some polish to them. Apps are close to being feature rich, the interface is fast and fluid and getting things done is easier than ever. Clearly the day of clicking through millions of menus is over.

Microsoft is on to a winner here. Windows 8 was designed and built just like Windows Phone. Get in, get out and go on with your life. For the average consumer Metro would be perfect as it keeps focus on one single thing, removes the clutter and makes sure that they remain secure. Power users will love Windows 8 because it’s faster, and with the improved Multi-Monitor support running more than one Metro and Desktop app at the same time would be easy as pie.

I’ll see a lot of people be a tiny bit confused at first, but in the end Metro will prevail. Microsoft is building a future proof OS. Days of only using your mouse and keyboard are over and these are being replaced by Touch screens, Multi-Touch adaptive Trackpads and Kinect.

I’m excited to see what the final build will be like and I’m opting for a Windows 8 Ultrabook by year-end. There are some amazing computer concepts out there like the Asus Taichi and Asus Pad 600. Now to twiddle our thumbs till then.