As a senior visual-effects artist at Bioware, Lewis has been privy to some of greatest games in history, such as Star Wars: Knights of the Old Republic and the online multiplayer Star Wars: The Old Republic. There’s no better person for the job then.

Lewis runs Slothfurnace, a site showcasing his other replicas such as other lightsabers, laser blasters and a shit-load more. Take a look at the pictures, it’s intense.

It’s a 1:1 replica of Obi-Wan Kenobi’s weapon from Star Wars: A New Hope. The lightsaber.

There are eight pages detailing how Lewis built the lightsaber but most importantly, it won’t cut the arm off a bounty hunter, or over-eager homeless person. From the video, we can also see how the blade has custom sound effects and “clashing sound” which mimics the movie to a tee.

Getting the lights right was Lewis’ challenge. There’s a total of 84 LED lights running up the detachable saber blade, powered by the 1200mAh 3.7V batteries. The lightsaber took  18 months to crack out, with Lewis spending well over 100 hours tweaking the blade to ensure its perfection.

It’s most definitely not for sale, but we can still drool over the hundreds of images on Lewis’ website. 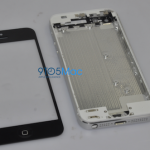