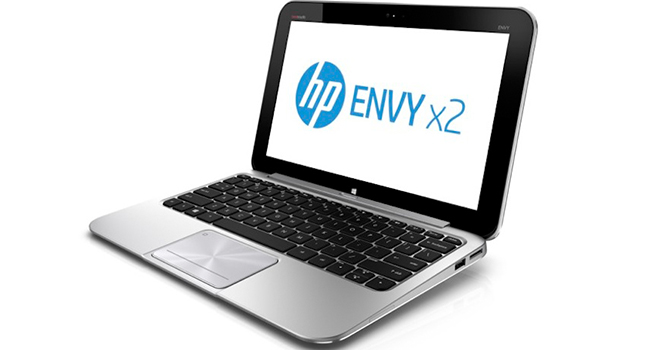 Not to be left out, HP has created its own varient of the new Windows 8 hybrid tablet/laptop that is swiftly taking over the industry. Ultrabooks step aside, this is the new thing that everyone should want.

Since Microsoft pulled a fast one and revealed its Surface, all the hardware manufacturers have stepped up their game and are bringing out their direct competitors to the Surface. Here is the Envy x2, HP’s own version. HP has gone its own route, though, and has made its hybrid with a fully fledged keyboard and trackpad that the tablet clips and magnetises to. Check out Engadget‘s video below.

HP is taking their Envy x2 quite seriously with an aluminium construction, Beats Audio, NFC, 11.6-inch IPS screen with 1366×768 resolution and even pen support. The tablet part of it weighs 1.5lbs, while the dock weighs in at 1.6lbs, making it a bit hefty for its size.

Inside it will run an Atom-based Clover Trail processor and have 64GB of built in memory storage. Battery life has not been mentioned, but the dock will have its own battery pack, so this should significantly increase the length of runtime. In terms of ports, there will be two USB’s, a microSD slot and HDMI, all of which should be expected. The camera at the back will be an 8MP item, but no front facing camera. HP obviously doesn’t condone video chatting.

Prices and a release date are still hush-hush, but don’t expect HP to delay too long and miss the rush for these hybrids.