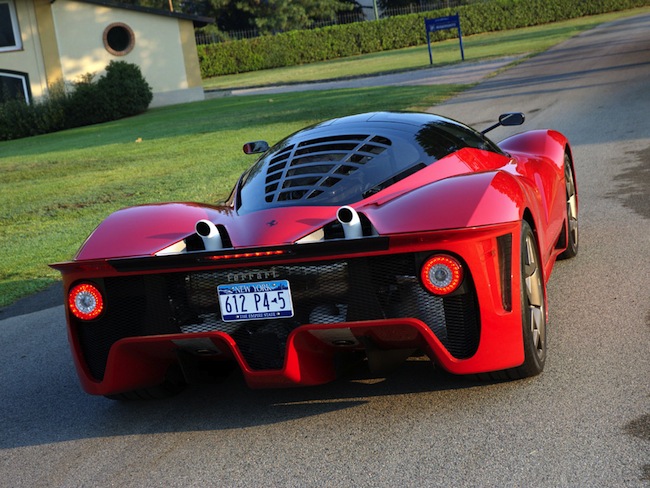 So yet another of the ridiculously rich has decided that a standard Ferrari just isn’t enough. To commemorate, I have accumulated the best that Ferrari has built, most of which has come out of its fabulous Special Projects division, hence the ever-present SP in some of the names. The beauty above, though — built by Pininfarina, not Ferrari — is what started most of the one-off Ferrari dreams. The newest project for Ferrari’s Special Projects division is for Cheerag Arya, a UAE-based Indian businessman. He already has 7 Ferraris in his garage, but not one with his name on it. It will be based on a 599 GTO, taking the running gear and exhaust. It has yet to be completed, but the image shows what it should look like. It has a significant resemblance to the new Ferrari F12, but that’s in no way a bad thing.

It truly is nothing short of spectacular. The P4/5 was built, not by Ferrari, but by Pininfarina and was in some way inspiration for Ferrari to start its Special Projects division. In some way it is actually a cleaner design that the Ferrari Enzo it was based on. The owner, James Glickenhaus, preferred the looks of Ferrari’s 60’s sports car, namely the P-series, hence the name. So, while he wanted the fastest Ferrari to date, he wanted it to look a little different. It is mostly an Enzo underneath, but the bodywork is all Pininfarina. He liked it so much, he decided to build a similarly designed racecar, albeit with Ferrari 430 Scuderia interals, named the P4/5 Competizione. This is the first car built by Ferrari’s Special Projects division. Built for Japanese collector Junichiro Hiramatsu. The fact that it is based on the F430 is quite evident. Ferrari didn’t really go out on a limb with it. Just a few styling tweaks here and there. It actually resembles the McLaren MP4-12C a bit, did you steal this design, McLaren? But if you want a custom Ferrari, have it however you like, because no one else will have anything like it. For Eric Clapton, of course, that’s obviously what the EC stands for, if you hadn’t guessed. It is supposed to be a modern version of the 1976 512BB. That was a classically beautiful car in itself, and this iteration actually outshines the original. It’s based on the 458 Italia, which is fabulous looking itself. but Mr. Clapton wanted a modern version of the 512BB to have his cake and eat it. He has had 3 512BB’s over the years, which highlights his obsession with the car more than anything else. Ferrari could not have made it prettier. If I had the money, I think I would bride Ferrari to make a second one of these for me. It may not be a Ferrari in name, but it sure is in parts. Based on the chassis and engine from the 430 Scuderia, the New Stratos is one serious piece of kit. It was created by Michael Stoschek, because he had a love affair with the original Stratos and didn’t want it to end there. The chassis was shortened and the body is made from plastic with an integrated roll cage. Besides the Ferrari components, the Stratos is very much its own car and takes from its predecessor as much as it did from the 430 Scuderia. It truly is a separate sports car from Ferrari. The plan was to make a limited production run, but Ferrari wasn’t happy — despite Luca Di Montezemolo, Chairman of Ferrari, praising how it drove — and denied Michael Stoschek of the opportunity.

Sultan of Brunei’s collection of one-offs With a collection of cars worth an estimated US$300 000 000, you would expect that there would be a few custom cars in there. But maybe not as many, nor as many from Ferrari. In fact, the Sultan commissioned Ferrari to make more than one of each of his custom cars, for what reason, no one knows. Although there is one of the FX’s in a garage of a car collector in Irvine, California that I happened to be lucky enough to see in person.

His collection includes a few convertible, station-wagon and sedan 456’s, a convertible 550 Maranello, a F512 TR Spider, a Testarossa based FX, and a few strange ones like the Sbarro, Mythos and F90. And these are only custom ones (and not even all of them). The image above shows the FX, probably the best looking of his custom creations.