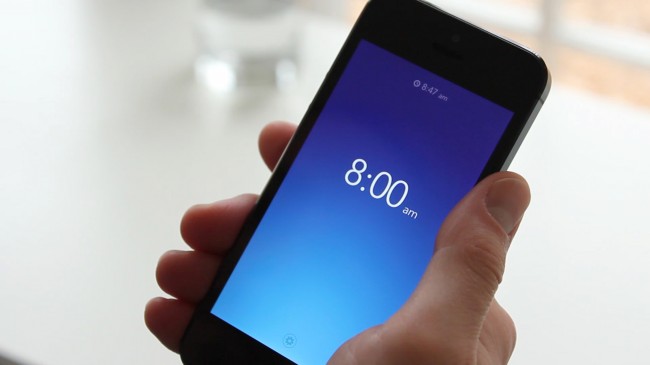 It’s no secret that the mobile phone has become a replacement for many extra tools that you use everyday. It replaces your GPS in the car, your calculator at the office and pretty soon, the wallet that you keep in your other pocket. The smartphone has pretty quickly developed into a Swiss Army knife for life and there must be hundreds of things it could potentially replace. But I’d have to guess that the very first device it replaced for me was the alarm clock, and I’d go even further to assume that nobody uses those awful 90s-esque clock radios anymore. We started with the entry-level phones, that allowed you to set an annoying (yet effective) alarm tone that would go off at the desired time, simple and effective. Later, when the scourge of polyphonic ringtones crashed onto the scene like a giant wave of MIDI guitar solos and cheap instrumentals, we were allowed to set our favourite songs as tones that would wake us up, and thereafter be ruined for all time after a week or two of it wrenching you from slumber. When smartphones rolled out and Apple brought out the iPhone, they built the alarm app into the depressingly simple clock app that still comes standard with iOS.

While “Clock” is a winner when it comes to functionality — there are still a number of features (as well as any form of design) missing from it that just leaves me wanting more. Recently, after chatting to a friend of mine about my quest to find replacement apps for each of Apple’s home-baked standard apps, I was told to check out a new alarm clock app called Rise, as I’d not yet banished that awful looking icon to the “Apple Crap” folder on my second page.

To start off with, an alarm clock is always going to be an alarm clock, plain and simple. You need it to wake you up on time every morning so that you don’t get to work late, lose your job and end up pawning your smartphone for food and shelter at a converted warehouse. If it allows you to use sounds and songs other than the standard tones, even better. So how do you improve on such a simple app that requires minimal effort, yet plays such an important role in your daily life? Not many options, but it does what it needs to do

Much like what Clear did for to-do lists, Rise does for the alarm clock. It takes the simple task that it is responsible for, nails it and focuses on making the use of it entertaining. The developers haven’t thrown in useless features like what time it is elsewhere in the world or what the weather is like right now (dude, just look out the window). Instead, they’ve crafted an incredibly beautiful app with one of the most original and innovative user interfaces that I have ever seen.

The app launches quickly before presenting you with a time specific coloured background that changes according to what time you set your alarm for. This might come across as cheesy but it really has to be seen to understand how beautiful and clever it is. To set the alarm, simply slide your finger up or down the screen and watch how the time (and background colors) change according to where you are on the screen. To fine tune your wake up time slightly, without dragging your finger again, just tap above or below the time to adjust with five-minute increments. Once you’re happy with the time, swipe right or left and watch how the ‘on’ text lights up to a warm and comfortable yellow glow.

The selection of tones that come with the app are properly recorded and feature alarms for all tastes, from abrupt to gentle, and you can also load up a song from iTunes if you prefer. The app also allows you to build a sleep playlist that you can listen to while you nod off, a nice little feature that adds depth to the app. My favorite feature of the app though, has to be the shake to snooze function that came with the recent update, great for those weekend mornings when you know you deserve a little extra shut-eye.

The only feature I found lacking with Rise was the ability to set multiple alarms, or to set alarm repeats by day i.e. “wake me up at six Monday through Friday, but let me lie in until seven over the weekends,” but I suppose this would detract from the minimalist design sensibilities of what the developers were going for with it. Other than that, Rise is an amazingly simple, yet drop dead gorgeous piece of work that I will happily wake up next to every morning. 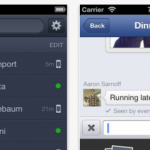