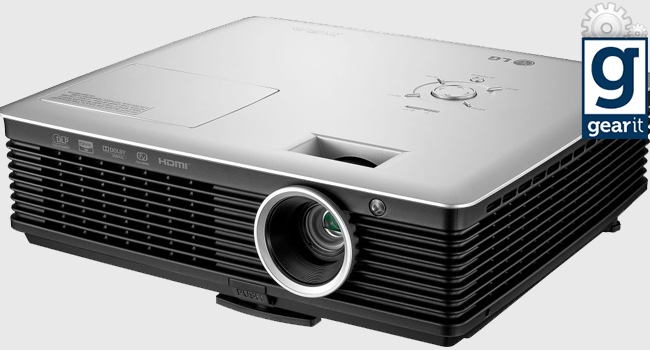 Plug your Xbox 360 or PC into a projector and you’re treated to a spectacle no television can rival. As the projector roars to life, funneling hot air through its innumerable vents, your lounge wall is transformed into a visual playground, home to a picture both bigger and more mesmerising than you could ever have imagined. For sheer size and spectacle, no television can contend against a machine that projects an image upwards of 200 inches.

But projectors have never been the obvious choice for gadget lovers and gaming aficionados. Traditionally they have been expensive luxuries, saddled with a finite life. A projector’s lamp can only last a few thousand hours before it needs to be replaced, and replacing said lamp is often tantamount to purchasing a new television. Perhaps then the answer is a projector that is relatively inexpensive to start with? Here LG’s BX327 is worth considering. It’s an entry-level projector for business owners and home-owners (the latter of whom want to wow friends and family for the first time with a massive display). It costs a mere R6000 (about US$700) and, used prudently, its lamp can last around 4000 hours. It’s also 3D capable, which, given the price, is remarkable. The machine itself is also extremely easy to use. All you need is a HDMI cable to connect the projector to your chosen media platform and a set of speakers with a working cable. And when the BX327 roars to life you’ll stagger in awe at the sheer size of the picture adorning your wall. It truly is amazing.

Indeed, anyone who wishes to treat their friends and family to a spectacle will revel in owning a projector in their home. They work fine in lecture theatres and board meetings, but their true power is their ability to transform any dormant lounge into a panoramic home-theatre.

Ironically however, the BX327 is perhaps best saved for a board meeting. Despite being 3D “capable” its measly 1024×768 resolution means it’s not the perfect fit for home entertainment. It’ll work fine for slideshows, yes, but your favourite Xbox 360 games will look pixelated.

Moreover, the BX327 is plagued by the same issues all projectors have battled against for years. You need a large room for the biggest possible picture. You also, inevitably, need a wall free of clutter. And with hot air pumping throughout the room, you’ll feel as if you’ve landed in the Sahara midway through a 60 minute TV show. Perhaps worst of all, you can only really enjoy your favourite movie when it’s dark outside, or when you’ve invested in particularly thick curtains.

Yet despite these inherent impracticalities, owning a projector (in your home) is a singular delight and as the BX327 powers to life for the first time you’ll fall in love with the sheer spectacle it produces. Spend any time with it in your home and you’ll struggle to return to an “ordinary” television simply because you aren’t engulfed in the picture. The BX327 is, like all projectors, highly impractical, but at R6000 it isn’t overly expensive either. Whether you decide against a new television in favour of a projector is, of course, a personal choice. As aforementioned, the BX327 isn’t perfect for your daily dose of Dark Souls, and Acer’s full HD 7531D is by far the better option. But the 7531D is R13000 (or US$1300 in the States) and with this in mind, the BX327 should be at the forefront of your mind the next time you crave The Dark Knight Rises spread across your entire bedroom wall. Furthermore, any corporate bigwig looking to keep their employees interested in the weekly boardroom slideshow will find the BX327 the most cost-effective way of suppressing errant chatter. Canes, after all, are frowned upon these days.

And as an entry-level projector for the workplace or home, the BX327 is a steal. The low resolution is a disappointment, yes, but the sheer size of the picture more than makes up for this. If you’re new to the projector market and you’re looking for something that is reasonably priced, this is your best bet.

So let your purse strings loose and bow to impracticality. The BX327 will make rival televisions look positively insignificant.