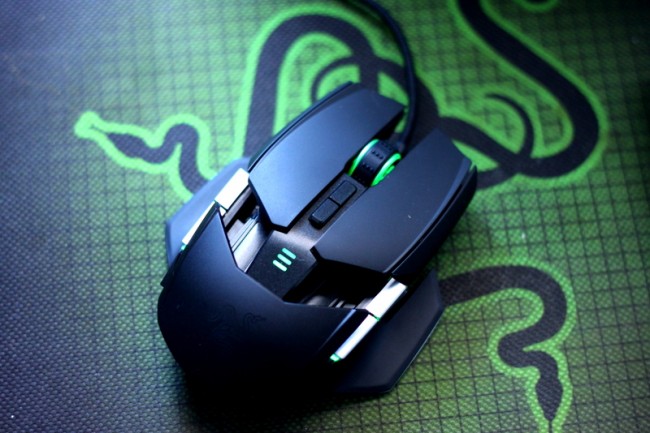 It’s nothing if not striking to look at
So the nice people at Razer are now attempting to revolutionise all of this with the Ouroboros. A completely ambidextrous gaming mouse that can be optionally custom-fitted for either hand, so nobody feels left out and everybody is special.

The mouse ships with two pairs of interchangeable magnetic snap-on panels that you can swap out as you like (or not use at all if you want to get all minimalist) – one is a flat, grippy panel for a streamlined feel, and the other has a sort of wing for parking your thumb and/or pinky finger. The back half of the mouse can be extended to accommodate larger hands, and can also be tilted up or down according to the user’s hand and palm profile.

With a bit of this and a bit of that, the mouse can be adjusted to fit just about any hand very comfortably, and as a value-added bonus it also looks like it’s designed to deflect military radar, which is a useful feature if you’re planning to take down the Pentagon or something. Full marks for ergonomics and Batman factor.

Conveniently, this mouse includes both wireless and wired functionality, and will recharge its battery when plugged in. The battery life is press blurbed at 12 hours, although I’d put it closer to 8-10 in maximum button-pushing scenarios. I did find that switching between wireless and wired caused Windows to stall for a moment, however, which could be a problem in the middle of a game. So don’t do that unless you absolutely have to, because nobody is going to believe the “But I was switching between wireless and wired” excuse when your KPD drops a decimal point.

The Ouroboros also has dual optical and laser sensors so you can use this thing on pretty much any surface, as well as 11 programmable buttons and a motion sensitivity of up to 8200 DPI. When the side panels are attached, these can be squeezed simultaneously as a clutch trigger to temporarily dial down the DPI for improved accuracy, and sniper-based griefing in your FPS of choice. It definitely takes some getting used to, but makes an enormous difference when you get it just right. The Dark Knight’s mouse
My only real gripe with the Ouroboros is that it uses Razer’s somewhat controversial Synapse 2.0 cloud-based driver software which requires email registration (what?), an always-on internet connection to save and load user configurations (why?), and — perhaps most troublesome — a working authentication server on the other side (how it’s all going to end). Obviously the mouse works fine as a plug-and-play device, but if you want to use all the fancy stuff, you’re stuck using it on Razer’s terms and only for as long as Razer chooses to support it. Next you’ll be wearing colour-coded jumpsuits and living on Victory brand gin rations and accused of thoughtcrime. Or maybe not, but it’s still an unnecessary annoyance.

With a pricetag of around R1 500 (US$170), the Ouroboros is not exactly cheap, but you’re paying for high performance and precision, state-of-the-art neon green LED backlighting, and the end to left-handed gamer discrimination. Go for it.

FIBS! I got an email from Razer’s PR guy-with-coolest-surname-ever, Alain Mazer, who pointed out that, while left-handed people are indisputably better than right-handed people at everything else, we sometimes get confused when it comes to the complicated workings of cloud-based technology.

According to Mr Mazer, “Once the mouse is registered and set-up, it does not require an always-on connection. Its features, advanced or otherwise, reside with the client and are enabled in an ‘offline mode.’ To be clear, an ongoing connection to Synapse 2.0 is not required for Synapse-designated settings in the mouse to be manifested in the user experience.”

So you’ll still have to register online to install the Synapse 2.0 software, but in the subsequent event of a fireball apocalypse or space monster invasion that knocks out your internet connection, you’ll still be able to use your Razer Ouroboros. It’s the little things.