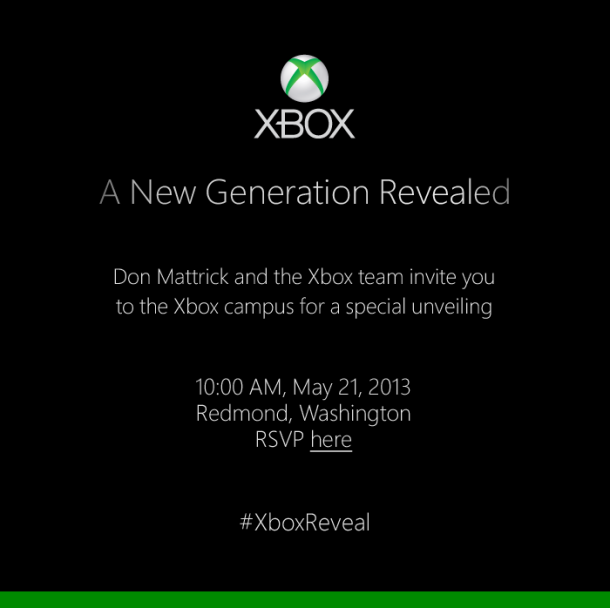 Come 21 May 2013, Microsoft will announce the next Xbox 720/Durango. At 10am in Microsofts headquarters located at Redmond, Washington the next great console will hopefully be revealed on stage, unlike the PS4 hardware which remains in the shadows.

The invite reads “A new generation revealed. Don Mattrick and the Xbox team invite you to the Xbox campus for a special unveiling.” Mattrick is Microsoft’s president of Interactive Entertainment Business. Microsoft will broadcast this event on Xbox Live, as well as the US cable channel, Spike TV. Here’s Microsoft announcing it on Twitter:

Tune in for the live reveal, May 21 at 10 AM PDT on xbox.com,@xbox Live, and Spike TV. #XboxReveal

The reveal of the Xbox, both the launch date and the hardware was one of the most widespread secrets in all of tech. Microsoft was so haphazard with its secret keeping that everyone knew about the hardware of the next Xbox shortly after the reveal of the PS4. It’s no big loss though, as both consoles seem to be the same in terms of innovation. Both consoles will have a “sharing” button to quickly spread captured images and video, as well as an always-online hardware focus.

It’ll be great to finally get our hands on the new Xbox, as the original console came out November 2005 and is starting to look a little long in the tooth. According to VGchartz.com, the Xbox 360 sold well over 62-million consoles, making it one of the best-selling consoles in the world – but not of all time, that’s the PS2 with over 155-million lifetime sales. More information (but not much) can be found on the official Xbox launch invite page. Join up and get pumped 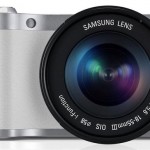