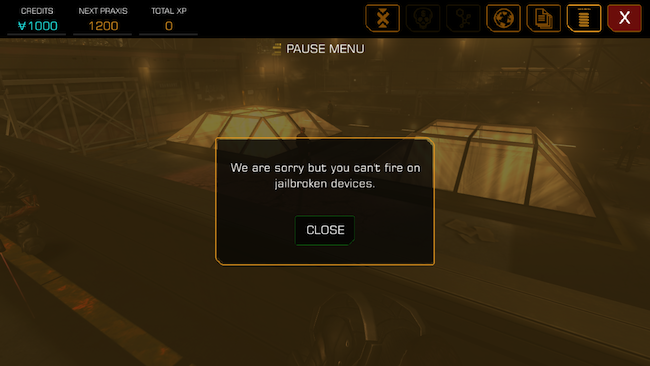 This is just fantastic. Shit-hot iOS game, Deus Ex: The Fall has a random surprise for iThingy gamers who’ve jailbroken their devices. Simply put, none of the in-game weapons will fire on a jailbroken iPhone, iPad or iPod. Here’s the screen of shame that awaits jailbroken iThingy owners, care of Reddit. Gamers who’ve opted not to pay the US$6.99 for Deus Ex: The Fall will see this screen the moment the tutorial section loads. The irony is, that even on the official app store page that hosts Deus Ex, these bloody pirates still complain.

Seriously?
The argument for jailbreaking (a blanket term for running unofficial software) any device, be it an iPhone or an Xbox is that the user can relinquish control from big brother and modify their devices how they see fit. But the allure to unlock a device is strong, especially when all it does is “void your warranty” as opposed to landing you in jail.

There’s a flip side to this piracy coin, and it may even affect the user who wrote the review above: namely that a small percentage of jailbroken devices are as such because their owners want to modify their devices any way they choose. We can empathise, as these owners are now doomed to play Deus Ex without any weapons, even if they have purchased the game. But we do not empathise with the pirates.

We wouldn’t call this a popular method of piracy-protection, as most companies choose to go the DRM route, either locking the app to one device, or having to use a serial key to register it online. We do applaud innovation though, and Deus Ex joins an elite core of games that have creative anti-piracy methods. Such as Arkham Asylum which disabled Batman’s cape glide, or Operation Flashpoint which would slowly “break” the game as you played. But nothing beats Metal Gear Solid on PS1 (remember that, sweet memories). At a certain point in the game, the gamer had to tune into a specific radio frequency, which was printed on the back of the actual DVD case the game came in. Hardcore.

We’ve reached out to Deus Ex: The Fall creators Square Enix to ask them if and when “legal” jailbroken users will be able to play the game as it is intended. Namely, as an all-out cyborg killing machine. If you were wondering, Deus Ex on iOS is fantastic and well worth US$6.99. 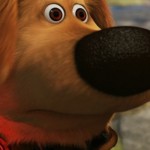