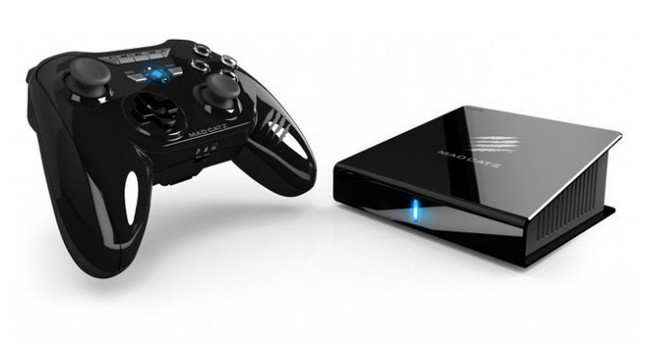 Mad Catz‘s mini Android console just got a launch date. The US$250 device will be available 10 December the company announced today. The M.O.J.O (or simply Mojo) faces a tough crowd of competitors as the cheap micro-console industry seems to be heating up.

Mad Catz is mostly known for its peripheral gaming devices so it hopes to have the edge when it comes to Mojo controller’s actual usability. It also features Mad Catz’s GameSmart platform which offers a range of Bluetooth accessories to use with the console.

In eager competition with Ouya and GameStick, micro-consoles for your tellies are becoming somewhat of a trend.

The popular Ouya goes for US$100 while GameStick merely costs US$80. Then there’s the high-end Nvidia Shield which has a couple of unique features such as console-to-PC streaming, a 5-inch LCD and the works. The Shield will set you back US$300.

These consoles are all running a developer friendly OS. With the Mojo you can add third-party controllers and get access to games from both Google Play and Amazon’s Appstore.

“We don’t care where you buy your games from. Developers don’t have to start coding different versions of the game for our console, right? If it’ll work on Android, and it’s got gamepad compatibility, it should work fine on the Mojo,” Mad Catz’s PR manager Alex Verrey said in an interview with Polygon.

Mad Catz announced its Android gaming console earlier this year at E3 while the specs for the Mojo has been confirmed as the following:

Mad Catz’s Mojo might seem a bit steep considering the tough competition heating-up but if you’re sold, you can place a pre-order on its website.