Today we are living in the “golden age” of gaming. The world of video games has never enjoyed the glory it does today and it has become an undeniable part of human culture. No matter what way you look at it, be it financially, philosophically or academically, gaming has become a monolithic industry that is taking the world by storm.

But it would not enjoy the success it does today if was not for the blood, sweat and tears of certain individuals who poured their very hearts and souls into this phenomenal world of bits and pixels.

So we here at Gearburn, have decided to pay tribute to this incredible people in a series of articles to honour them for their immense contribution to the world of gaming. Here is part one of Gaming Industry Greats.

C’mon, people, you can’t show the player a really big bomb and not let them blow it up. Gabe Newell is undoubtedly one of the most influential people in the modern gaming industry. He is a man so widely praised and admired that many gamers worldwide refer to him as “Our Lord and Saviour”.

Newell’s story starts in 1996 when he and other members of Microsoft left to form the Valve Corporation. During their time at Microsoft they had manage to earn a rather healthy sum of money that was used to fund the development of their first title, Half-Life.

Half-Life­ was universally praised as a gaming masterpiece, receiving over 50 Game of the Year awards from a wide array of respectable video game publications. IGN described Half-Life as one of the most influential first-person shooters of all time, saying that: “When you look at the history of first-person shooters, it all breaks down pretty cleanly into pre-Half-Life and post-Half-Life eras.”

Putting Half-Life 2 aside (which also received critical acclaim from gamers and gaming publications alike) Valve and Newell’s next contribution to the world of gaming was the release of Steam in 2003, an online distribution platform for PC games.

Steam revolutionised the way people acquired video games by making it available in the digital space. One no longer had to travel to the nearest game retailer to buy a hard copy but could now purchase and download a PC game from the comfort of their home. It’s speculated that they currently have an incredible 80% share of the digital distribution market for games.

But wait, that’s still not the end of Newell’s noteworthy accomplishments. In 2011 Valve announced The International, a DotA 2 (a game that Valve also revived after eight years of the original’s conception) eSports tournament that offered a prize of US$1-million to the winner.

At this time eSports wasn’t even close to the world-wide phenomenon it is today and offering such an extravagant amount for winning a game tournament was absolutely unheard of. Newell said it was Valve’s way of saying thank you to the DotA community and their dedication to the game and was a move that sparked the rise of eSports world wide.

Newell’s pertinent place in the world of gaming is due to his connection and understanding of its community. He is a man of the people and that passion shines through in every move he has made.

I have always had a fascination about what’s inside a human being. When one thinks of immersive and cinematic storytelling in video games, Hideo Kojima is unquestionably one of the first names that will (or should) pop up in your head.

He has constantly been pushing the boundaries of what can be done in video games and today is considered as one of gaming’s great innovators.

When Kojima was still young he originally wanted to become a filmmaker and always had an avid love for American cinema, an influence that can be clearly seen his work.

Once he discovered games though, there was no turning back and he dedicated his life to creating video games that have both captivating mechanics and emotional narrative depth.

Read more: From Liquid to Solid: a Metal Gear retrospective

He entered the industry at a time when it was still relatively new and, together with other innovative developers, played his part in revolutionising the industry and raising it to the glorious status it is enjoying today. Kojima is best known for his work in the Metal Gear franchise, a universally acclaimed series of over 20 titles that follows the stories of Big Boss and Solid Snake (to name the two central characters crafted by Kojima).

Although he has produced and designed many other titles (Policenauts, Zone of the Enders, Castlevania), the Metal Gear series has been the platform where he has showcased most of his talents and innovations in gaming.

Kojima is credited with pioneering the stealth genre of video games and many of the mechanics he employed in the Metal Gear series have laid the groundwork for other similar titles to follow.

It started with the original Metal Gear released 1987. Although there were other games that featured simple stealth mechanics (Castle Wolfenstein, 005), Metal Gear conveyed it in a way like no other title had before. Since then, with the release of every Metal Gear title, Kojima has never ceased to impress.

Just to add an interesting fact, one of Kojima’s games (Metal Gear Solid IV) has been featured in the Guinness Book of Records for both the longest individual cutscene (27-minutes) and the longest cutscene sequence (71-minutes) in a video game. This, among many other reasons, shows how Kojima is always looking to pave a new path for the way we experience video games.

He is one of the most innovative and prolific game designers alive today and more than deserves his spot on this list. Now that the Metal Gear saga has come to a close with Metal Gear Solid V: The Phantom Pain, one can only wonder what the mastermind will come up with next.

We don’t exactly fit in. Anywhere. And we’ve made that our greatest strength. Rhianna Pratchett is a master of interactive storytelling and is currently one of the leading pioneers in the art of Narrative Design.

As a writer and the daughter of legendary fantasy author, the late Terry Pratchett, you would think she would struggle to cope with living in the great shadow of her father.

Well think again. Over the last few years she has crafted her own legend and is undeniably the most sought after game writer and narrative designer in the industry today.

She originally found herself in the non-fiction world of writing, working as staff writer for publications such as MINX Magazine and PC Zone. It wasn’t until 2002 she entered the world of script writing and narrative design with the RPG classic, Beyond Divinity.

It must have been an eye opener for her as, since then, she has totally immersed herself in the world of video games and other geek related avenues such as comic books. Somehow she even finds the time to dabble in writing short stories.

In 2007 she got nominated for a BAFTA award for her work on Heavenly Sword and only a year later she received a Best Videogame Script award from the Writers’ Guild of Britain for her work on Overlord.

Somewhere in this time she also worked as the lead writer on the brilliant and innovative parkour title Mirror’s Edge, where she crafted the story of Faith. Mirror’s Edge’s Faith is one of the most intriguing female protagonists in gaming.

This would showcase the strength and perception she possessed as a writer by showing the insight she had into how people related to video game characters.

In her own words: “My heroines and heroes have always been the ones who were ordinary, but through the events of a story, became extraordinary.”

She would continue this trend through the following years, especially (in my opinion) when it came to Lara Croft in the reboot of the Tomb Raider franchise in 2013. The new Lara Croft felt more real and easier to relate to than the guns-blazing trapeze artist of the previous games.

One thing that it also had in common with Mirror’s Edge was the presence of a strong female lead in a video game, something that has been rather neglected in the history of video games.

Today the list of projects she has worked on is astounding and it seems to be only ever growing. She has accomplished all this in short amount of time, making me extremely excited to see what she will amaze us with next in the years to follow. 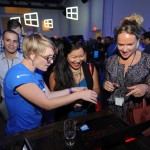