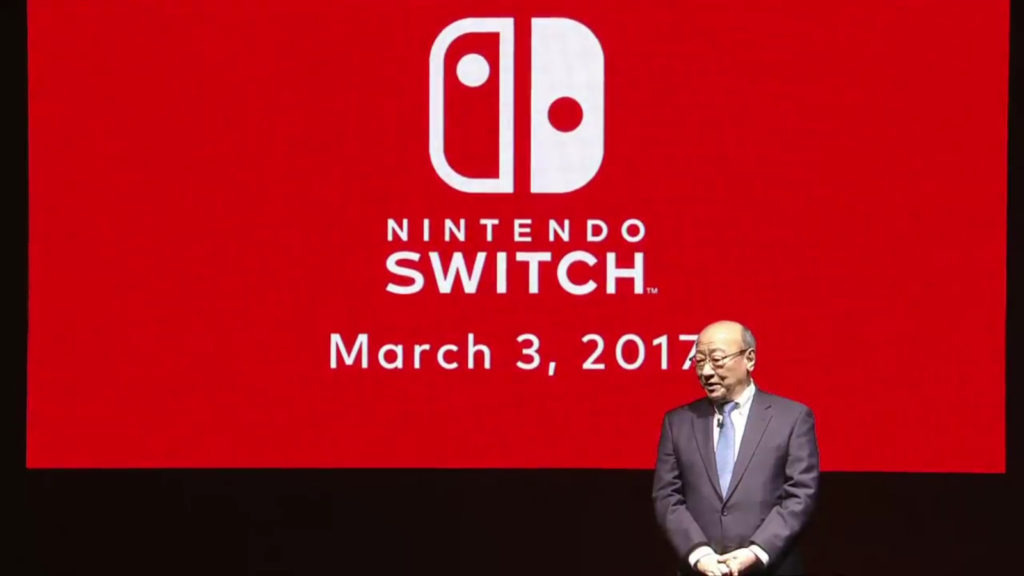 Update: Core Group has confirmed a 3 March release date for South Africa as well, but hasn’t mentioned a price.

Original article: The Nintendo Switch is just a few months away from its launch date, with the Japanese video game titan holding its big go-home presentation in Tokyo today. So what did they reveal about the innovative new console?

Well, the all-important launch date and price were revealed.

Nintendo president Tatsumi Kimishima confirmed that the device would release on 3 March 2017 in the USA, Japan, Canada, major EU nations and Hong Kong. Price-wise, you’re looking at 29 980 yen or US$299.

Kimishima added that there wouldn’t be region locking for the console, so users should be able to buy and play games from any region. And speaking of tech that should go away, the firm has also moved away from resistive touchscreens, using a capacitive screen for the Switch.

So what do you get in the box? Well, there’s a console, dock, JoyCon controllers, HDMI cable, wrist straps for JoyCon and AC adapter. The Pro Controller will be sold separately.

What about the all-important battery life? Well, Nintendo reckons that you’ll get between two and half hours and six hours out of the console, depending on the games you play.

One interesting console feature revealed by Nintendo is that users can wirelessly connect up to eight Switch consoles for local play.

The Nintendo Switch is getting a paid online service, as well as no region locking

In terms of online play, Nintendo said that their service would be a paid experience, but would be available for a trial period until fall 2017. The service allows users to play online, chat with friends and make play appointments.

The company also shed light on the JoyCon controllers, saying it had a button for taking screenshots and a sensor for detecting distance from objects and gestures. For instance, Nintendo said that the sensor could detect rock, paper or scissors hand gestures. But the JoyCon controller also has HD Rumble tech for vibration.

“(It) can convey to you the feeling of ice cubes in a cup. You can even tell… the number of ice cubes in the glass,” Nintendo said, adding that the rumble will let you “feel” how much water is in said glass.

The JoyCon controllers will be available in grey as well as blue and red colours.

Nintendo’s top-flight Nintendo Switch is Super Mario Odyssey, with a planned release in the holiday season.

The game shows Mario running around in a New York-style city, as well as various fantasy worlds, but Mario also has a new hat-throwing ability. The ability gives Mario an easier way to dispatch enemies, as well as allowing him to use the thrown hat as a platform.

Of course, Nintendo needs a Wii Sports-style title as well, right? And that happens to be 1 2 Switch, being a minigame compilation of sorts, featuring weapon duelling and all manner of other activities. The title will be available at launch.

Other notable first party titles shown off at the event include Splatoon 2 (a sequel to the popular Wii U online shooter), Mario Kart 8 Deluxe and beat ’em up title Arms (which sees you using the JoyCon controller to throw punches at opponents). And yes, Legend of Zelda: Breath of the Wild made an appearance too, along with a confirmed 3 March launch date. Other titles confirmed for the console include Fire Emblem Warriors, Dragon Quest 10 and 11, Dragon Quest: Heroes 1 and 2, a new title in the Shin-Megami Tensei series, Square-Enix’s Project Octopath Traveller, a new game starring the protagonist from No More Heroes and Xenoblade Chronicles 2.

In fact, there doesn’t appear to be a shortage of developers committed to the platform, with Nintendo saying that 50 companies are working on 80 games for it.