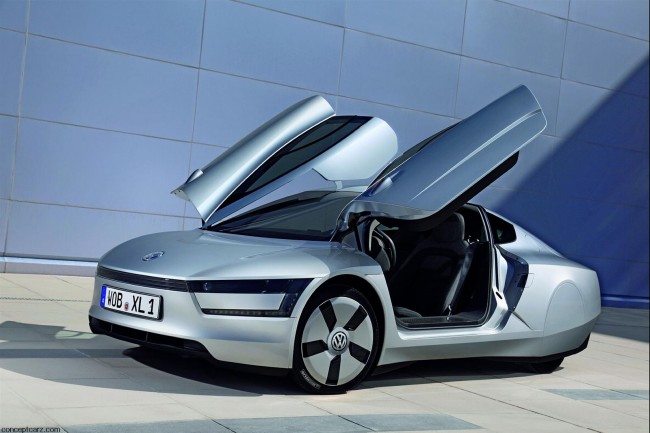 The improvements around electric cars over the last decade have been phenomenal. As the world begins to understand the need for alternate energy sources, electric cars lower in price and end up sitting driveways, just like a regular car would. While Top Gear pretty much hates the electric car, we love them, so letâ€™s get stuck into four electric cars that you should consider owning.

When choosing a car, people tend to decide based on a a combination of factors: design, practicality, performance and price. As a car junkie, I tend towards the performance side of things, but when a car like this, the VW XL1, comes along, I can’t help but want it. It’s not fast and it’s not wholly practical considering it’s only a two-seater. She is a looker though, and being a hybrid, I could think of few other cars that would make a better city commuter, or do so as stylishly or cheaply.

And I do mean cheap. Ok, so the price of the car has yet to be announced, as a matter of fact, it’s unclear whether or not it will actually be put into production. But based on the figures that VW says this car will be capable of, there is no doubting the desirability of the XL1.

VW is touting an economy of 314mpg. It achieves that crazy figure by holding nothing back. The XL1 has a carbon fibre body which is said to have a Cd rating of only 0.189 , meaning it would be the most aerodynamic production car ever. Powering it is a two-cylinder 800cc TDI diesel motor with 47bhp coupled with a 27bhp electric motor and 5.5kWh battery pack. If it keeps its carbon body it will weight 795kg, which is a fraction of the weight of other hybrid cars. Hopefully this car makes it onto the market — and I don’t see why it shouldn’t — because it  will make quite the stir.

The first time I set eyes on this car I couldn’t believe it was electric. Weren’t electric cars supposed to be ugly? That was part of the formula, no? Well, mould shattered. If I woke up every morning to find this in my garage, or, in fact, if I found myself waking up in this car because I couldn’t afford a garage, I’d consider myself happy.

The creator of this beauty is Henrik Fisker, and yes, he is a car designer by trade, and you can see it just by the fact of how sexy and unrestrained the styling is. The Karma is pitched against executive saloon cars like the 5-Series BMW but offers alternative power arrangements. Specifically, hybrid-electric power.

But not as you would normally see it. Because, while it has both an electric motor and a petrol motor, only the electric motor drives the wheels. It’s called a ‘range extender’ because it uses the petrol motor to, well, extend the range of the car. It has two rear-mounted electric motors with a combined power output of 403bhp with an astounding 918lb ft of torque available from a standstill. Once the 20 kw/h battery pack is depleted, a flip of a switch turns the 2-litre petrol motor on to act as a generator for the electric motors.

I think that is truly fantastic, because it seems like the best solution thus far to the whole range anxiety problem that electric cars bestow upon their owners. Oh, and did I mention how fantastic it looks?

First off, let me just say that Mercedes claims that this will be the most powerful electric production car ever made. Wonderful. With an electric motor at each wheel, I am not surprised. Combined, the motors produce a dizzying 740bhp and 738lb ft of torque. So, basically, enough to tow a medium-sized apartment block out of its foundations.

Where the transmission would usually sit is a 60kw/h lithium-ion battery pack weighing in at 548kg. Coupling that with the faintly ridiculous 45kg for each motor means that, like most electric cars out there, it’s going to be a fatty. That’s 180kg sitting on the wheels alone. Lord knows how that will transfer to the driving experience. I can’t see this as a track star though, more like a poncy robot-to-robot racer, or a Sunday afternoon ego boost.

Am I the only one who sees a blatant contradiction in values here? Electric cars are supposed to be all environmentally Captain Planet. And here is this powerhouse electric body-builder shaking things up. Not that I’m complaining. But I don’t see tyres lasting too long on this brute.

When it was first revealed, the BMW i8 was truly a show-stopping car. It took a completely different design approach that was refreshing and bold. The first test mules kept this choppy, sparse, almost papier-mÃ¢chÃ© styling, and it seemed for a while that BMW would actually keep it. Alas, hopes shattered, BMW brought out an updated mule shown below. And, while it isn’t lacking attractiveness, it certainly doesn’t have the occasion that the concept originally had.

That said, it is actually going into production as a hybrid sports car, and kudos to BMW for that. With Audi opting out of the electric sports car game (at least for now) when it dropped its R8 e-tron plans, it’s refreshing to see BMW pushing forward and producing the i8.

While it will only be properly revealed in its production state later this year, some lucky motor journos have had the opportunity to ride in an i8 and its little city dwelling brother, the i3. While the i3 is going to be pure electric, the i8 will be hybrid and focussing more on the driving experience.

It will be carbon fibre bodied, keeping the weight down to a reasonable 1 495kg and powered by a 1.5 litre turbocharged three-cylinder petrol motor with a surprising 220bhp on offer. Connected to that is the same electric motor found in the i3, sporting 128bhp. Combined, this should make the i8 quite the quick car, then. And damn straight, because if its going to be heralded as a hybrid sports car, it should behave like one. 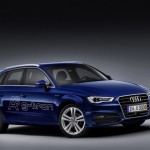