Outlandish concept cars are not conspicuous by the absence from international motorshows, in either design or engine technology. While good in theory these concepts donâ€™t always (almost never) translate into identical road going versions â€“ those are almost always pared down in both style and drivetrain application, well illustrated by Ryan Bubearâ€™s piece on concept-to-production cars that got lost in translation.

Geneva International Motorshow debuted a slew of radical concept cars, one of them being (take a deep breath) the Quant E-Sportlimousine With NanoFLOWCELLÂ® Drivetrain Concept. I left that little Copyright symbol in for good reason because the aforementioned (QESND?) has just been approved by the TÃœV SÃ¼d in Munich for use on public roads powered by NanoFLOWCELL technology, or complicated electricity.

Who is Quant and why is this a big-ish deal? Well, it is a large company which, amongst many other things (probably all performed in crisp white lab coats) “…tests consumer products to ensure their safe functioning in compliance with official standards, and the provision of management system certification and occupational health and safety services…”. You can read more about the company here if you really have to.

Of course this is just the first big step in taking the Quant E-Sportlimousine from motorshow concept to road legal production car and whatâ€™s especially impressive is that this has happened in just over four months since its debut at Geneva. Sure, the Quant limo might be the first application of NanoFLOWCELL technology, but its founders have bigger plans â€“ from aerospace, rail, industrial to individual houses and whole towns â€“ thereâ€™s even talk of a public offering at some point.

How does it all work? Here comes the science part:
â€˜The flow cell battery is an effective storage medium for electrical energy. Flow cells are chemical batteries that combine aspects of an electrochemical accumulator cell with those of a fuel cell. Liquid electrolytes circulate through two separate cells in which a â€œcold burningâ€ takes place, during which oxidation and reduction processes happen in parallel and thereby produce electrical power for the drive train.â€™

Baffled? Join the club or study the tech here or just watch this mesmerizing video instead 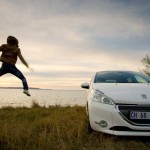