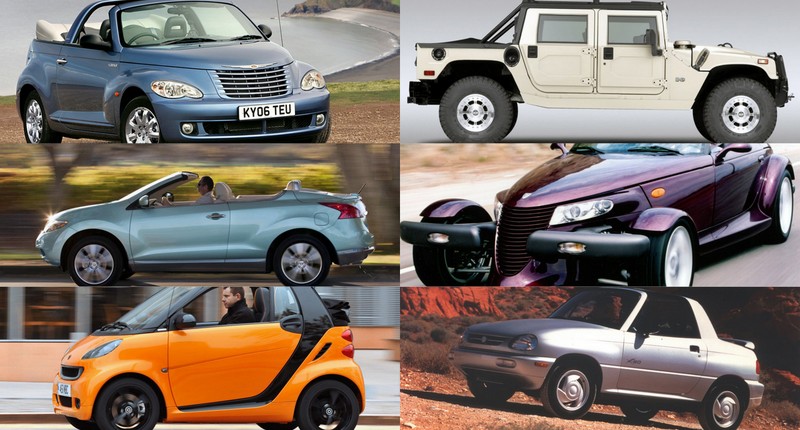 The folks over at Jaguar Land Rover have made an interesting decision.

Yes, after three years of fierce speculation â€“ sparked by the unveiling of a certain topless concept at Geneva back in 2012 â€“ the British automaker has revealed that it will indeed be taking a convertible Range Rover Evoque to production.

Does the world really need a soft-top crossover? Well, Jaguar Land Rover apparently thinks so, and as a result the Evoque Convertible is scheduled to force its way onto your local dealerâ€™s floor some time in 2016.

Truth be told, weâ€™re not convinced. But if any premium crossover could pull it off, itâ€™d likely be the best-selling Range Rover of all time â€“ a vehicle that has proven to be immensely popular (particularly with fashion-conscious buyers) since its global launch in 2011.

With the rag-top Evoque firmly in the front of our minds, we look back to six convertible models that quite simply should never have been built. Will the Rangie cabrio be added to this list in years to come, or will it become a roaring success? Only time will tellâ€¦ Should the chunky Nissan Murano ever have lost its top? Itâ€™s a question nobody likely asked, but the Japanese automaker decided to answer it anyway. Yes, in 2011, Nissan started selling the CrossCabriolet, which was essentially the regular Murano compact sport utility vehicle without a conventional roof or rear doors.

But in 2014, the brand announced that it was phasing out the bizarre all-wheel drive model, chiefly due to a lack of interest. No surprises there, then. It certainly wasnâ€™t just a cheap chop-job though, with Nissan pouring plenty of cash into the project. In fact, the CrossCabriolet was unique from A-pillar back, featuring all sorts of structural reinforcements and new seats front and rear. In 2005, Chrysler added a two-door convertible derivative to its range of retro-styled PT Cruisers. The four-seater rag-top even boasted an old-school roll-over hoop, which simply added to all that existing quirkiness created by the upright grille and bulging wheel arches.

Production of this strange cabriolet ended abruptly in the twilight of 2007, less than three years before the five-door PT Cruiser hatchback itself would draw its final breath. In total, the controversial PT Cruiser â€“ including the convertible â€“ achieved 1.35 million worldwide sales. In 2013, however, the BBCâ€™s Top Gear declared the PT Cruiser Convertible the worst car of the last twenty years. Ouch. Believe it or not, the Hummer H1 â€“ itself a limited production vehicle â€“ was also available in soft-top configuration. But it wasnâ€™t simply a case of prodding a button, waiting for the fabric hood to do its thing, and basking in the sunlight. No, this H1 featured the type of difficult-to-remove canopy that makes us appreciate todayâ€™s typical folding roofs.

And, with the top in position, it certainly looked awkward, too. Despite retaining the definite road presence of the hard-top models, the Open Top variant seemed more than just a little unbalanced, and even somewhat incongruous. Still, it was arguably saved by the cool factor that came with being built in the very same facility as its military-spec cousinsâ€¦ Is it an open-air sports-car? Is it a sport utility vehicle? Weâ€™re not sure even Suzuki knew exactly what it was building when it dreamt up the oddball X-90 to replace the Samurai back in the mid-nineties. This crazy little creation employed an agricultural body-on-frame construction and a raised suspension, yet had only two seats and a targa top. And it sort of looked like a coupe. Sort of.

After two years of pretty terrible sales figures, the Suzuki X-90 â€“ which could be had in either rear-wheel drive or all-wheel drive configuration â€“ was put out to pasture. In fact, it was such a rare sight on roads that Red Bull decided to snap up a few to employ as promotional vehicles, slapping a colossal branded can on each vehicleâ€™s roof. As bizarre as the X-90 was, it did at least preview the sort of compact crossover that has today become rather popular: one lacking in both practicality and off-road ability. The Prowler. A title conjuring up images of a dishevelled character roaming the streets around primary schools offering candy to unsuspecting little kids. But it was, in fact, an outlandish vehicle first produced in 1997, and later marketed as a Chrysler when the Plymouth brand was killed off. Rumour has it that the engineers behind the monstrosity were given orders to create something that blurred the lines between hot-rod and sports-car.

And blur the lines it most certainly did. The Prowler â€“ of which close to 12 000 were built (by hand, no less) â€“ featured open wheels at the front and a decidedly pointy snout. Under that strange bonnet lurked a 3.5-litre Chrysler V6, which sent its moderate power to the rear wheels via a four-speed automatic transmission. Although later examples featured a slightly more potent mill, the Prowler was still criticised for not quite having the go to match its madcap show. The Smart car â€“ despite its distinct lack of interior space â€“ certainly makes a case for itself as a city car, particularly if youâ€™re brave enough to park it at right angles to the kerb. But the cabriolet version (across the first two ForTwo generations, anyway) took an impractical vehicle and made it far, far worse. Not only was it pretty stodgy to drive, but it also cost a packet more than the standard coupe version. And wind noise was a distinct drawback, too.

The Mercedes-backed automaker has yet to add a soft-top version of the third-generation ForTwo to its new line-up, but rest assured, itâ€™s coming. The new model, of course, shares up to 70 percent of its parts with the feisty little Renault Twingo, which can only be a good thing. Still, despite the brandâ€™s reasonable popularity, we canâ€™t help but think the old soft-top Smart ForTwo was a bridge too far. 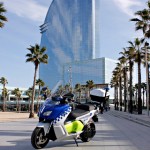