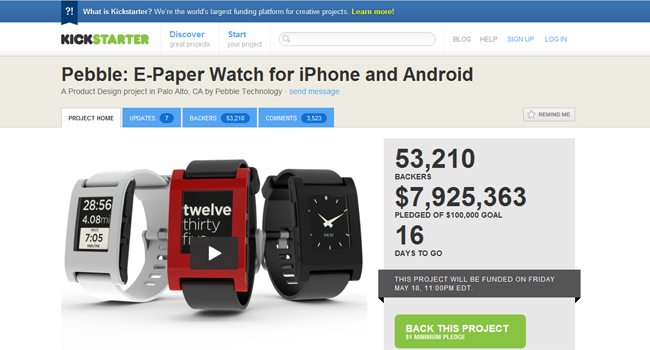 The Pebble smartwatch set all kinds of records during its run on crowdfunding site Kickstarter. Now the company is getting down to the business of business.

RunKeeper’s in-activity fitness data will be shown on Pebble’s E-Paper display, which the company says works as well in direct sunlight as it does indoors.

Runners, cyclists, hikers, walkers and skiers will be able to use Pebble to wirelessly control the RunKeeper app, eliminating the need to remove the phone while on the go.

Listening to music through your smartphone and want to change tracks? No trouble bro. The company claims you can use the watch for that too.

“Making the RunKeeper app accessible from Pebble is another step towards making fitness tracking simple for our users.” said Jason Jacobs, CEO of RunKeeper. “People don’t just want to track their fitness activities, they want to do so in the most convenient way possible, and you can’t beat the form factor of a smart watch.”

Eric Migicovsky of Pebble Technology said the company was flattered that Runkeeper, which has over 10-million subscribers, is its first app partner.

Pebble is set to open up the watch’s software development kit (SDK) in August, meaning that more apps can be built for the watch.

Migicovsky reckons that doing so could be what really sets the watch apart:

“One of the most exciting things about Pebble is that anyone will be able to build apps for the watch, which is going to result in new capabilities and functionality that we haven’t even thought of yet.”

Pebble’s smartwatch has more than 53 000 backers on Kickstarter who have pledged over US$7.5-million towards the project.

The watch connects to iPhone and Android smartphones, alerting you with a silent vibration to incoming calls, emails and messages.

Read More
What are the 10 weirdest job titles on LinkedIn?
LinkedIn • 2 May 2012
Read More
More