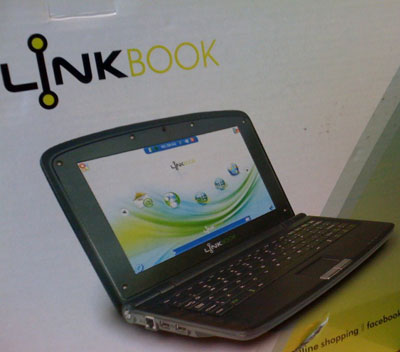 Vodacom, the South African subsidiary of worldwide mobile giant Vodafone, has been working on and is close to releasing a new, ultra-cheap internet-focused netbook it is calling the “LinkBook”.

It marks the local subsidiary’s first move into the hardware game. On a world-wide level, this is one of the few times the Vodafone group has moved into an arena other than mobile phones.

The device is understood to be an “internet device” — its operating system geared primarily towards a web experience as opposed to the traditional offline desktop experience. The Operating System (OS) is open-source, Linux-based in an effort to avoid expensive licence fees that often come with Windows and Microsoft office. The LinkBook could further help broaden web and computer access in emerging markets, and tackle what commentators often refer to as “the digital divide”. The device is also most likely aimed at a school and youth market, spanning all market segments.

The Linkbook also comes with Open Office as well as a few other utility programmes pre-installed, such as a dictionary and educational games.

Its desktop will also sport short cuts to popular content and ecommerce online applications and sites, encouraging users to go online and browse rather than have an offline experience. Commenting on the Memeburn story, internet analyst Arthur Goldstuck says that such a device comes “at a time when the nature of computing is changing, and it’s anyone’s bet how the mainstream computer of tomorrow will pan out.”

“The likes of the Netbooks and iPad have helped to push the evolution of computing along to its next destination, wherever that may be, and the Vodafone device is clearly part of the journey into the new era of computing.”

“There is a desperate need for an affordable computing device in the developing world, especially for schoolchildren and students. If Vodafone can overcome the shortcomings of previous efforts in this direction such as the MIT and Intel devices, it could make a significant impact on computer penetration and Internet use in Africa.”

The device has an embedded sim card, as well as a basic webcam for skype chats. It has two USB ports and an SD slot. There is speculation the device will retail for around the R2 000 mark, perhaps putting it in a similar range to the famous US$100 PC that was championed for emerging markets some years ago.

Nokia this year also released its own netbook, although it followed a traditional offline desktop model, relying on Windows 7. Nokia’s netbook is aimed at a more premium market.