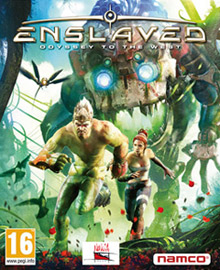 I’m a sucker for post-apocalyptic sci-fi action, so when a post-post-apocalyptic storyline comes along, I tend to geek out hard and immerse myself in the ensuing tale. With a truly unique storyline, awesome boss-men, kickass wardrobe and incredibly rich character development, Enslaved: Odyssey to the West is an honest to Kratos, O.G. (original game).

Storyline:
You begin the saga in a cryogenic holding pod, suggesting that your avatar is a prisoner or slave of sorts. After a malfunction of unknown origins, the futuristic prison/slave transport ship holding the convict begins to crash and the resulting mayhem sees the character breaking free of the burning plane in dramatic fashion.

After the ruckus, you crash-land in a majestic cityscape of a decaying and overgrown New York City hundreds of years in the future. You are Monkey, a prisoner who has fought his way to his freedom. You are extorted by your companion Trip, a cute girl who has control over you with a typical self destruct mind-control device, which allows an integrated heads up display (HUD) and suggestive prompts from Monkey’s point of view (POV).

Slavery is not the best way to begin a friendship and the uneasy and friction-filled alliance begins its quest through the barren wasteland, helping each other out along the way.

Who Dunnit?
The opening credits reveal the game is powered by the Unreal engine. A good start that allowed my youth to be revisited and gave me that endearing nostalgic feeling. The game was developed by English based Ninja Theory, who provide breathtaking visuals and world-class facial animation. I was unfamiliar with the company’s previous titles but being published by Namco Bandai Games proves its mettle.

Who’s Innit?
The story was written by Alex Garland whose other works include books and movies like The Beach, 28 Days Later and one of my favourite movies, Sunshine. Garland creates a rich dialog that keeps you captivated and allows for wonderful character development. Monkey is voiced by Andy Serkis (of Gollum fame) who also provided the motion capture and helped in the script writing. Not content to sit on the sidelines, Serkis directed the game — very impressive considering his upcoming roles in some truly epic Hollywood blockbusters.

The game’s score was provided by award winning composer Nitin Sawhney, whose ambient breaks are memorable.

Game play:
I honestly thought there was only one way to play platforms since Prince of Persia and God of War. And I was expecting this to be the same. The 3D combat model is, I dare say, superior to that of POP. Managing multi-directional attacks that look awesome and fairly simple, but not easy, does require some mastery.

Traversing the platform can be done at pace, and is very innovative in the directions your character can travel, leaving your puzzle-solving abilities sorely tested. Even though all pathways are subtly highlighted, the game will keep you enthralled throughout.

Light-hearted platforms are not easy to get right but “Enslaved: Odyssey to the West” hits the mark on all accounts. The game gets a nod from me and a very strong 8/10.