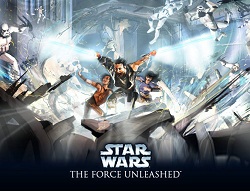 Being a long time Star Wars geek and big fan of the first Force Unleashed game, I could hardly contain myself when I heard that a sequel was to be released this year. And at first glance my enthusiasm seemed completely justified. But before long, I was quickly reminded that things are not always as they seem.

The core experience of The Force Unleashed II remains basically unchanged. Once again, you play Starkiller, secret apprentice to Darth Vader, and bringer of preposterous amounts of destruction through wielding the force as you have never seen it before… unless you played the first game.

Your mission is to discover the truth behind your mysterious resurrection (as Starkiller was killed in the original Force Unleashed) and find your love interest from the first game, Juno Eclipse.

One of the most exciting elements of the Force Unleashed for most hard-core fan boys has always been the historical significance of the games plot to the entire Star Wars saga. Taking place in a relatively unexplored time period between episodes III and IV, most followers of the narrative would delight in gaining any insight into this untold bit of history. That being said however, unfortunately The Force Unleashed II doesn’t really bring much to the table in this regard. The story is based on an acceptable premise, but it feels flat and unnecessarily extended merely for the purpose of bringing out a sequel.

The team over at Lucas Arts have done a marvellous job at producing a beautiful looking game, with (mostly) believable character animation, wonderfully polished levels and awe-inspiring backdrops –all of which are genuinely immersing and feel authentic to the Star Wars Universe. However, as the game progresses you start to notice some cracks underneath all that pretty wrapping.

The Jedi powers you wield also look truly awesome (in the original sense of the word) and you won’t tire of blasting imperial walkers with devastating lightning bolts or force-pushing troopers off balconies any time soon. The combat mechanics in general are pretty entertaining.

Force abilities are varied and the light saber movements are smooth and enable you to effortlessly slice your way through throngs of storm troopers without much resistance.

However, the combat sequences and enemy variations are extremely repetitive and become quite monotonous after only an hour or so of gameplay. The game promises a feeble 5 or 6 hours of playtime, but in the end I was wishing it was even shorter.

If you’re a hard-core fan of the Star Wars Universe, the Force Unleashed II might be good for an afternoon of mild entertainment, but to me, this game was thoroughly disappointing and exceedingly frustrating.

Whilst playing it I couldn’t help but get the acute impressions that the entire game was dreamed up as a downloadable expansion to the first game, until the suits over at LucasArts decided it could make a lot more money being repackaged and sold as a sequel.