More
Home
Subscribe
Skip
Continue in 10 seconds
Skip
By Staff Reporter
Read nextGadget fetish of 2010: It’s all about the tablet 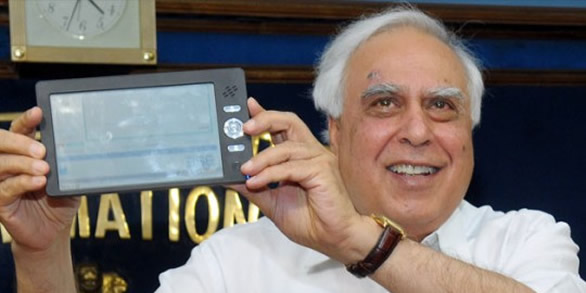 The Indian government won headlines around the world when it unveiled a prototype $US35 tablet computer in July, but questions are now growing over whether the project will become a reality or not.

At the computer’s launch, Human Resource Development Minister Kapil Sibal vowed “the solutions for tomorrow will emerge from India” as he revealed the breathtaking price tag — a fraction of the 500-dollar cost for an Apple iPad.

Officials said the touchscreen device, aimed at the country’s millions of students, could even be hammered down to just 10 dollars once production rates increase.

The tablet computer, which has yet to be named, is billed as boasting a three-hour power back-up, Internet browser, media player, video-conferencing capability, good data storage, hard disk drive and webcam.

“The price includes a small component of profit for the manufacturer and hence higher volumes will fetch more returns,” Sibal said.

“This low-cost device is likely to revolutionise the education system in our country. It will have a very positive impact on our literacy campaign.”

But Indian promises of a “laptop for the masses” have hit the buffers before. The government said it was on the brink of putting the computer on sale in both 2005 and 2009 — only for the much-hyped product never to materialise.

Terry Thomas, a partner in the local arm of global audit firm Ernst and Young, is among those striking a note of caution.

“A computer with all normal functionalities at this price will not be sustainable unless it is subsidised by the government or the industry,” he said.

Thomas suggested a “stripped-down version” with a bare minimum of facilities could perhaps be engineered at nearer the advertised cost, though users would likely be unimpressed.

The first 100 000 computers are slated to be released as soon as January, but details of its exact specifications are still scarce — as is the level of government subsidy that will be essential to keep the price down.

Experts have also warned the device could struggle with issues such as cheap imports and India’s rising labour charges.

“If one takes out the cost of labour then the cost of materials like plastic and silicon will have to be virtually nothing,” said Joydeep Bhattacharya, of the Indian unit of US computer giant Hewlett-Packard.

The motherboard of a prototype cost 47 dollars alone, Sibal’s ministry said in a statement earlier this year, claiming it was still possible to cut costs.

Sibal hopes that 10 million of the computers will be manufactured within 12 months of the first one coming off the production line — an ambitious target by any measure.

Just months before the first models are due in public, the government has been determined to keep its manufacturers a secret.

The Delhi-based Manufacturers’ Association of Information Technology (MAIT) stressed that government subsidies may not be able to guarantee the 35-dollar price tag (about 1,600 rupees) against market pressures.

MAIT executive director Ashwani Aggarwal said he wondered if the price included taxes, transportation charges and delivery costs. And he said not enough thought had been given to the potential users.

“Parallel to the cost factor, serious effort must be put into triggering demand through programmes that deliver easy finance to students,” Aggarwal said.

India, whose 61 percent literacy rate lags far behind many other developing nations, such as China with 92 percent, is making major efforts to improve its education system.

The planned tablet computer is part of a push to increase the number of students in higher education and give them the technological skills needed to further boost India’s economic growth.

Despite the many obstacles, George Paul, executive vice president of Indian technology firm HCL Infosystems, is optimistic, saying the march of progress means the affordable computer was a long-term certainty for India.

“The One Laptop per Child Association in the US was difficult to comprehend and there was scepticism then but it led to the low-cost Netbook laptops,” he said. “This is a journey which will evolve.” – AFP