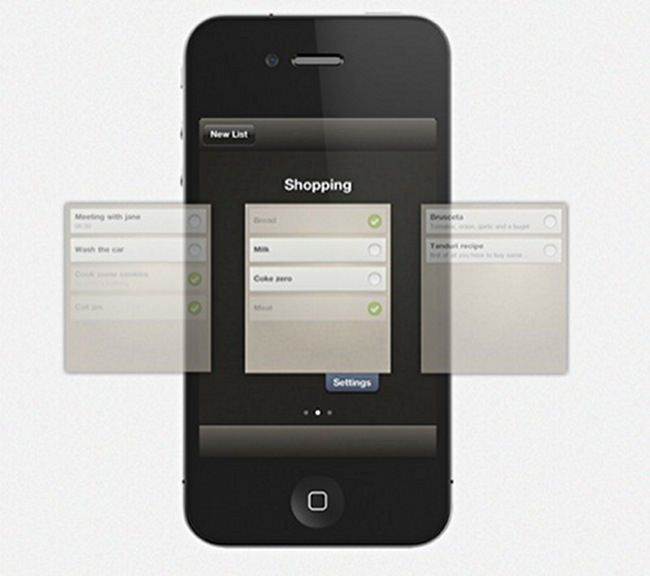 This week I take a look at Listbook, an app that helps to boost productivity through its absolute ease of use and simple, but effective, design.

I am, like all of you out there (but probably a lot more so), very guilty of falling into the habit of procrastination. Small and seemingly insignificant tasks, be it at home or at work, simply just don’t get attended to because they are just that: small and insignificant (and probably don’t need to be done right away). But you know how these things go, you forget about all the small things until they’re due and you stress and panic and end up doing a terrible job of it in the end.

So naturally, I am a big believer in to-do lists. I’ll write the day’s tasks down on a post-it and stick it on my desk at work…where it stays for a few days before falling off and getting thrown away, without anything on the list actually getting done. Or I’ll type them out nicely on my iPhone’s notes application, only to forget about them later that day. Pointless.

With Listbook, this doesn’t happen.

Listbook is exactly what the name says: an app that allows the user to create and manage an unlimited number of to-do lists on the iPhone, and it does so with the greatest of ease. Simply create a list, tap the plus button to add items to it and there you go, a to do list of all your small and insignificant tasks in a few seconds. Managing this list is even easier: simply tap the item the item once completed, and it fades into the background or disappears (depending on your settings).

What I like most about Listbook is the way that you can switch between all your lists with ease. By mimicking Safari’s zoom out and swipe method of changing between various browser tabs, Listbook makes switching between your daily to do list at work and your weekly grocery shopping list a breeze. You can then tap these lists to get a closer look, tap a task to see what it entails, or sort list items according to importance or deadline. As for forgetting about these tiny tasks that end up stressing us out a lot more than they should, Listbook allows you to set badges for each of your lists that displays the number of incomplete list items on the app icon when it is closed or in the background (you can disable this feature though). So you’ll always have an annoying little red badge on the app that shows you just how unproductive you are, which helps me a lot.

Something that Listbook lacks, and that I’m pretty sure we’ll see added in a future update, is an option to add a timestamp to a task that you’ve just completed. I think that if you were running quite a number of lists with loads of little tasks, it would be great to be able to monitor when you completed the task. I also think that some sort of built in reminder notification system would be greatly appreciated, where users could set deadlines for tasks and have reminders pop up on screen to make sure that you’re not succumbing to your old habit of leaving everything to the last minute.

Listbook is an app that I now use on a daily basis for work lists, personal to-do lists and shopping lists. I love the ease of use, the beautiful and intuitive design, and the way it makes me feel when I tick things off on my list and they slowly fade into the background, silently applauding me for being so productive. It is a relatively new app and the developers have mentioned that this is only the beginning, so I can’t wait to see what features they’re going to add to this app…I do hope though, that timestamps and notifcations are on their to-do list.