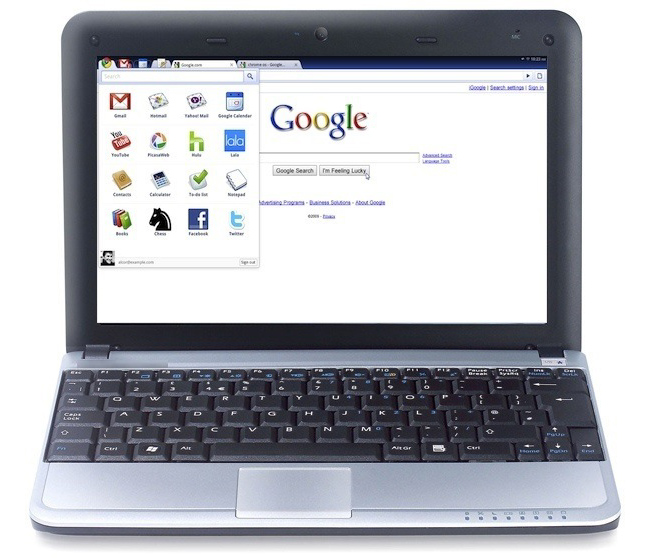 The Chromebook is slowly coming into focus. Currently manufactured by Acer and Samsung (what? no American laptop brands up for it?), key specs look like this:

Early reports say it’s much superior to the CR-48 prototype that a couple of US reviews got sent last year, but it’ll need a little bit of real world use to tell. Pricing-wise, it’s no bargain, with the new machines at $350-$500 depending on spec, although Google’s pushing hard on a ‘pay-as-you-go’ $20-28 per month deal over three years (not a bargain).
The Chromebook is basically a tablet with a keyboard, with no OS as such. You get a browser. Only. Although now Google’s includes a file system of sorts so you can use and interact with external storage.

Is the Chromebook a good thing?
If your departure point is that Google not only does evil, but is evil, then you’ll look at the Chromebook and almost see its bruise-hued aura of corruption.

Everything Google does – everything – from its search engine to the Android OS to it’s funky services, has at its core the sole purpose of knowing more about you, what information you have and what information you’re looking for, so that it can more accurately target the advertising that drives its voracious 8.6-billion dollar revenue machine that must keep growing, or Wall Street will punish it. The Chromebook has in its sights the very last hold-out of your personal information and choice: your own computer with a hardrive safely locked away inside (assuming you’re not a sloppy chump that exposes it to the ‘Net). Now with the Chromebook, everything you do on your computer – everything – will travel through the mighty cloud datacenter and data munching vacuum cleaner that not even Google fully controls.

The applications you use, the messages you send, the configurations you prefer, the desktop image that is your quirky personal touch, the letters you write, the reports you prepare, the websites you surf, the research you do, the recipes you seek, the weird skin infection you looked up on WebMD, the pictures you’ve taken, the music you listen to.

Your life. Now on Google. Even the bits you didn’t think were on Google (put possibly already are…).

Dialing the Fear back a notch
Now that the stage has been set for fear and paranoia (and it’s all true), let’s dial the hysteria back a notch. (Although Kristine Schachinger at Searchenginewatch does a great, impassioned, Richard Stallman-class plea to reject the Chromebook utterly as an abomination).

The Chromebook is the next evolution of computers, the very miracle John Gage of Sun Microsystems spoke about twenty five years ago. The network is the computer. This idea has repeatedly crashed and burned like DSK because the hardware has been too slow with too little memory, and until recently we didn’t even begin to know what ubiquitous broadband was. That’s changed.

More important, the browser technology is now there. You can create an application feel inside a browser window. Yay, Java. Yay, Ajax. Yay, jQuery. Just yay.

Now dialling the Fear back up
The idea of a real, live Chromebook is awesome. If it wasn’t Google’s. You know, the company that created the open source mobile phone browser that isn’t really open source, and certainly doesn’t give users control over it. If it were open, would there be a need to root your phone? We’re talking about the company that tried to kill tiny little Skyhook over a positioning system that competed with Google Maps. Google staff individually? Great guys. As a giant faceless corporation?

On the up-side, many people can and do root their Android phones, and there is a very small universe of people who feel the need to do that. Just imagine the incentive for clever hackers to root the Chromebook to let you run what you want, storing your data where you want, using any Web-based, or even locally cached, apps of your choice.

The Chromebook is without doubt a great shove forward for computer science and information technology. It is a terrible step down a terribly wrong path for personal privacy and choice, free of opaque and powerful corporations and governments.

But go, Google, because at the very least your engineers write great software, and do amazing things with technology and networks and datacenters. Let’s just hope the seething masses look to hackers to break open the ‘open source’, because privacy and choice are more important than ignorant expedience. Oh. Hi, three hundred million Facebook users.