By Matthew Buckland: Publisher
Read nextiPaid 2 much for this damn thing so of course it’s great 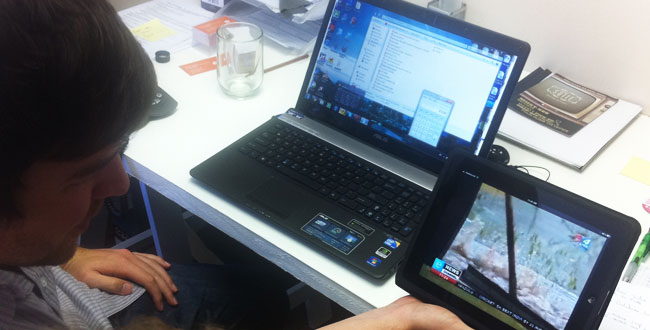 The idea of being able to watch live satellite TV on my iPad, iPhone and laptop sounded just too good to be true. So it wasn’t long before I had the Drifta, DSTV’s much-publicised DVB-H mobile TV decoder, in my hands.

It’s an amazing little innovation, designed locally, that brings nine selected DSTV channels like SuperSport, ENews and others to your laptop, iPhone, iPad or selected Nokia phones. There are also future plans to bring the broadcast to Android phones and other phones that support the DVB-H signal.

The real wonder of the device is what it could be, unfortunately not what it is. Once you start using it, you quickly find yourself hitting limitations and wanting more. You realise that this is “generation one” and you are an early-adopter lab rat. We’re going to need to wait a few more generations until they get this right.

Setting it up
Setting up the Drifta was easy: The Apple iPad and iPhone applications and the Windows client were easy to download and install, working instantly with the decoder. Thumbs up then for the new-world part of the business. The old-world part of the business (the call centre part of it) was a bit more challenging. It took multiple calls, long waits and a few days to get the actual subscription activated. One person in the call centre did not know what I was talking about. Must have missed the memo.

Once I eventually managed to get the subscription activated, the experience was surreal. Our office came to a standstill and we marvelled at the live broadcast before our eyes on the iPad. The concept of being able to watch a live satellite broadcast on an iPad or iPhone has great geek appeal. But after a while the novelty wore off, and I found myself wondering where would I use it? So, where would you use it?
TVs, with DSTV subscriptions, are everywhere these days — in pubs, offices, airports… everywhere. Maybe some years ago it made sense to have a mobile decoder — but now? Perhaps I could use the Drifta to listen to the TV commentary and watch replays at the actual live rugby or cricket game? I’m not quite sure how well an iPad or Laptop will go down with the Loftus faithful and a beer in one hand, but perhaps I could sneak an iPhone in without being spear-tackled by someone in the crowd?

Maybe this means TV in my car? But I could only see this working really for live sports or breaking news, not really the kids TV channels — most parents who own iPads have small libraries of saved videos for their children. It would also be contingent on the service being enabled in remote areas — currently it has limited reach across the country.

Some irritations
Another irritating factor is that the quality of the broadcast is not good. The broadcast resolution is a poor 320X240 — that’s just horrible in the Age of HD. This may lie in the origin of the original DVB-H project, being originally meant for small Nokia and Samsung screens, pre-dating the iPad and iPhone age. On an iPad or a laptop screen the video does not look good. It rules out home use on the PC, iPad or iPhone, because there are better alternatives here. This may change if the signal quality improves, which I believe it will.

The Drifta case feels very plasticky, and has a flimsy, highly-breakable aerial. While it’s not crucial that the device looks and feels as good as an iPhone because it will always be tucked away, I feel DSTV could have done a better job on a manufacturing level, which was probably outsourced. DSTV has always struggled with the hardware and to some extent the software side of its business. While delivering a word-class broadcast and brilliant content, their decoders have always been a bit below par. The decoders and current PVRs are not comparable to offerings in the UK (such as by Orange) and the US (such as the TiVo). But this apparently is all set to change with major software upgrades on their way.

The future is… in the future still
The future of this piece of plastic may be limited anyway — quite probably however the future of DVB-H broadcasts will not lie in a separate device, but a pre-installed chip within all devices. The hassle factor for the Drifta is high. It’s a separate device that you need to lug around and charge separately. It makes me think that only the real zealots and early-adopters will find a place for the Drifta in their hearts. It may change though when we don’t need such a device. A separate decoder may just be a transition-technology.

The Drifta is being offered to premium DSTV subscribers for free. Compact subscribers need to pay R36 extra per month for it. For no extra cost, I have nothing to complain about and I’ll use it happily every so often, but if I had to pay for it in the future, I’d probably begin to question the value I get out of it.

The verdict? It’s not really a Gear or a Burn, but somewhere in between. Use it while it costs relatively nothing. But for me to part with more moola, I’d need to see a better quality broadcast, more channels being offered and an easier way to watch it on my various devices.

This is a great innovation by DSTV, and although it has not quite hit the spot, I like where the company is headed.