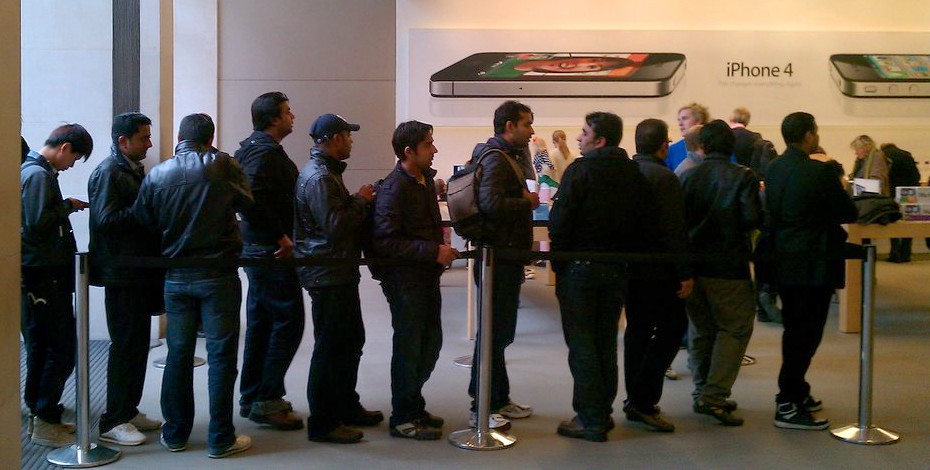 We’re starting to get some whiffs of the iPhone 5, some real, some imagined. It is supposed to release in September, and bets are that Apple will once more comprehensively conquer the cool end of the smartphone market. Gearburn has sniffed around, and come up with our predictions of what will be in and out in the fifth generation of the phone that made Apple’s fortunes.

We are so delighted with our top-of-the-line gadgets, content even. But the instant an upgrade appears it becomes about as appealing as a pork sandwich in a kosher deli. For close to a decade now, the iPhone revolution has been rocking our worlds and a steady stream of upgrades has kept fanboys queuing outside the iStores. Competitors have not been twiddling their thumbs, and Apple is going to have to pull out something amazing to meet the very infalted expectations of the market.

So with no further ado – the Gearburn prognosticator of the iPhone 5.

iPhone 5 Release Paired with iOS 5
The latest iOS is aimed at a springtime release or autumn for first tier markets in the Americas, Europe and Asia, perhaps across all markets. Chances of coming true – 90% probability.

iCloud only for iPhone 5

The possibility of the iPhone 5 being a cloud-only storage device is slim to none at this juncture, but it’s an intersting possibility. Yes, the iPhone 5 can activate itself out of the box (bye, bye iTunes), software updates will take place over the air and iOS calendars as well as mailboxes can be created independently of computer-based software. However, applications will still need to be installed on the device, and very few countries have the capability to support unlimited wireless downloads. Perhaps at least a start to push users in the iCloud direction? Maybe full iCloud in the iPhone 6? Chances of coming true – 20% probability.

A5 processor from iPad 2

The iPad 2 has a blisteringly fast A5 processor which almost predicts what you want to do next. Apple is not in the habit of playing games with their hardware and incorporating the A5 processor into the iPhone 5 is a no-brainer. Let’s then say that the speed will have to match the newer Androids and be over a 1GHz. We’re confident about this one. Chances of coming true – 100% probability.

The antenna may also be improving as the iPhone 4 has one of the worst internal antennas in recent history (remember AntennaGate?). Apple may be nixing its luscious but crack-prone glass back and putting in a metal cover with more reception-improving elements, away from possible Death Grips. Chances of coming true – 80% probability.

Don’t expect the Retina display to improve – insiders have stated that bumping up the already crystal-clear resolution would double the price of the iPhone 5. What has changed is the 3.5″ screen that Steve Jobs insisted is big enough for most ocnsumers now looks diminutive. We expect the screen to be taken up to over four inches. At the very least Apple need to match the competition with full 1080p support for content.

Or do something a bit different and change shape. Rumours have been circulating that Apple have purchased new glass cutting machines in order to create a curved glass screen – this could be to compete with the excellent design of the new Nokia N9. Chances of coming true – 60% probability.

A better camera? Count on it – sources predict an 8MP camera as Apple have shipped in new sensors from Sony, confirmed by the Sony President Howard Stringer. LTE Support? Probably not as this would mean that the iPhone 5 would have to be a 4G-only phone, which will cut out a massive chunk of their user base. A new form factor? Engadget and Gizmondo would like to think so but Apple insiders have stated that the upcoming device should be referred to as the iPhone 4S as it will actually have only very slight cosmetic changes. A lower price point? No. Apple sells its products at a premium and only drops the price when a particular phone is superceded by a new model.

September is coming and iPhone lovers are itching for their new generation iPhone fix. With so many radical changes at Apple on the Web and software front, expectations of massive hardware revelations may be asking too much. We recommend keeping expectations low. Anticipate a better, faster, sexier phone, not the second coming of the mobile messiah.