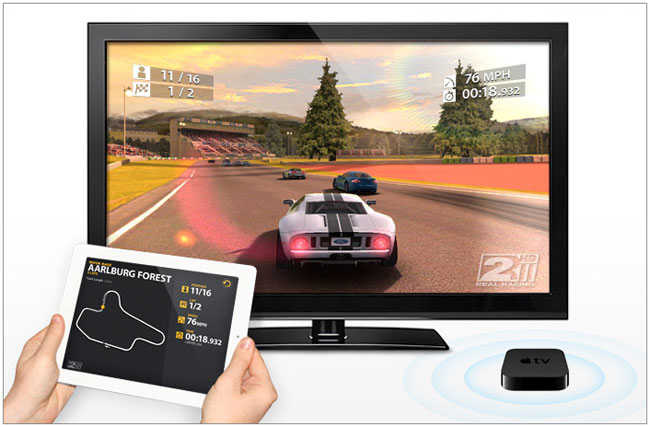 It seems Nintendo’s reveal of its new Wii U has started a videogames arms race similar to the one started with the original Wii. Allowing the use of dual-screen games with touch-based controls, the Wii U has inspired both Apple and Sony game designers to explore similar concepts.

Apple’s recently announced update to their mobile operating platform, iOS5, contains a major new feature called AirPlay Mirroring. This new feature will allow an iPad and an AppleTV system to pair up with each other. The AppleTV would then display a game to a TV, while the iPad act as a controller, optionally showing additional information on its touchscreen.

Real Racing 2 HD, from mobile game studio Firemint is set to be the first game to take advantage of AirPlay Mirroring over a WiFi link. According to Firemint’s website, the iPad itself will act as the controller, taking advantage of the devices gyroscope. The tablet’s screen will show the tracks and other information while the AppleTV shows the race itself. The company introduced dual-screen technology in March with HDMI-mirroring.

“It allows us to bring a fresh, never-before-seen level of freedom to Real Racing 2 HD. Combined with the precision steering and brilliant 3D visuals made possible by iPad 2′s phenomenal hardware, Real Racing 2 HD over AirPlay promises an experience you’ll have to play to believe.”

Meanwhile, Sony Computer Entertainment Worldwide Studios head Shuehi Yoshida, in an interview with Develop, admitted that “already people are starting to ask about linking Vita and PS3 to do something similar, in terms of using two screens, and having controls on the screen.”

Yoshida went on to say that Nintendo’s new direction may well inspire Vita developers to replicate the Wii U’s capabilities and that, to some extent, this is already happening.

“Lots of the things that developers of Vita games are doing, as you may have seen, is experimenting with connectivities between Vita and PS3. The Wipeout team came up with their cross play ideas, and the other Vita teams have come up with ways of playing with two systems. It’s just a matter of time, as we provide the SDKs to developers so they can make use of both PS3 and Vita, and they might come up with something interesting.

(NOTE: This story has been updated to reflect Firemint’s support for dual-screen pre-iOS5 – the new technology is dual-screen over WiFi.)