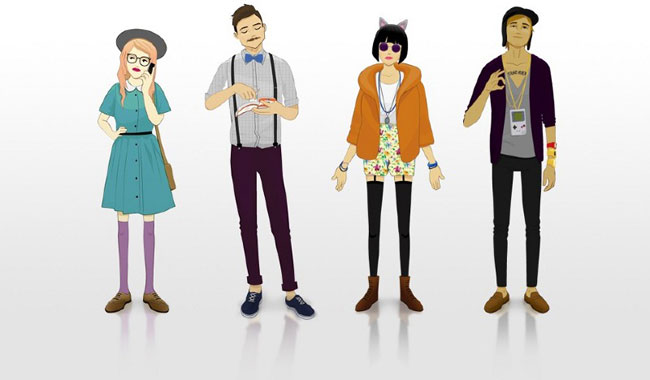 This week I take a break from the seriousness and formalities of personal finance apps, business expense recorders and news feed readers to take a look at a music discovery and recommendation app that I have stumbled upon recently. An app that amuses, entertains and pokes fun at pretty much the entire youth demographic of today, in a tongue-in-cheek kind of way.

Pocket Hipster is simply what it says, an annoying, totally non-conformist, unique, creative ‘individual’ on your phone that thinks he (or she) is better and cooler than you because he listens to music that you haven’t even heard of yet, dresses in vintage clothing, is creative in some form or another and hangs out in only the most awesome little coffee shops. If you’re not familiar with what a hipster is, please take a look here before continuing.

Good, now that you’ve been enlightened (and have that awesome tune in your head), let’s continue.

From start to finish, the developers have really nailed the hipster stereotype. This is evident from the point of launching the app when you’re greeted with the title screen, and the actual pantone number of the pink background, taking a shot at how all hipsters regard themselves as creative, in one way or the other. You’re then greeted with a white screen and your introduction to the first of the two pocket hipsters that come with the app: “Hi, I’m Delilah Delevine and I like to write political statements on my finger nails,” she says off-handedly.

She is dressed in a green dress, knee-high socks, thick-rimmed glasses (do you have a prescription for those?) and one of those silly, soft cowboy hats. Simply tap on her and she’ll drop an awesome quote that will have you sniggering at how overbearingly awesome she really is. Hipster number two is mustachioed, fixie bike-riding Sebastian Fowler, who tells you: “Facial hair this ironic doesn’t come easy,” and that he “totes can’t be fussed with gears”. He functions like Delilah, with his own set of risible sayings and actions.

Okay, so what is the point of this app, besides taking the piss out of today’s retro youth culture?

Tap on the music icon in the bottom right corner and the hipster will grab your phone from you and start playing a song from your iPod library. After listening and frowning for a few seconds, you’ll be insulted about your poor taste in music and given a few recommendations of bands that you probably have never heard of, which are way better. You can then cycle through the recommendations, listen to a short clip of each one, buy the track on iTunes and tap to love the song. So in essence, a very clever music discovery and recommendation app that puts a completely different spin on how you find new music to listen to. As is becoming the standard on the app store (and a big factor in our selections in this Gearburn App of the Week three-ringed spectacular), Pocket Hipster is beautifully designed in appearance and user interface. Its minimalist appearance sticks it to the hipster design stereotype even as the app itself runs smoothly and intuitively. The character animations and voice overs are super slick and high quality (which probably accounts for the large file size), and the way it interacts with your iPod library is simply genius. It really is quite funny to see this animated character grab your iPhone and start playing one of your favourite songs, only to frown and tell you it’s crap.

When tapping on the other icon at the bottom of the screen, you’ll be taken to a virtual hipster shelf where you can select from your two hipsters (looks like they have two more on the way in future updates), read more about the app and its developers, and interact with a variety of hipster paraphernalia like a Polaroid camera, a pair of thick-rimmed glasses without lenses and Calvin’s beloved fixie bike.

It’s funny. Vaguely useful even. Pocket Hipster is by no means essential to all iPhone users (kind of like those black-framed glasses), but it really is fun to play with and share with your friends. As far as the music discovery and recommendations go, I now have a few new bands and artists, which you’ve probably never heard of that I’m checking out and keeping to myself (see what I did there?). You’ve probably never heard of Pocket Hipster, but check it out, you might find something new to listen to, and who knows, maybe these hipsters are onto something…