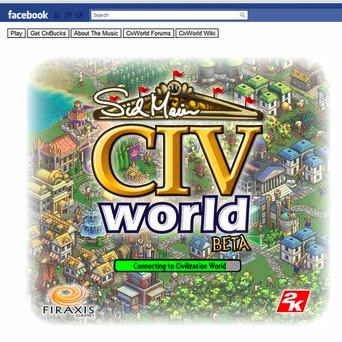 Facebook friends will be able to conspire together to rule the world in a free version of blockbuster “Civilization” strategy videogame crafted for the online social network. 2K Games on Thursday released a “Sid Meier’s Civilization World for Facebook” application online at apps.facebook.com/civworld.

“Our team set out to create an exciting ‘Civilization’ game for Facebook where for the first time, players can join with their friends to build a powerful empire and rule the world,” said Sid Meier, director of creative development at Firaxis Games studio.

The Facebook game is set in an online world where players collaborate to build the strongest nation and become the most powerful civilization by wielding economic, technological, political, or military might.

“With over ten million units sold worldwide, ‘Sid Meier’s Civilization’ is world renowned as one of the greatest strategy game franchises,” said 2K president Christoph Hartmann. “We’re excited to bring this fun and social game to people on Facebook.”